Long-Distance LEGO Collaborations (or How the Internet Changed Everything, Again... With LEGO)

Blogs, forums, and file sharing have changed the face of how we interact... but I'm guessing I don't really need to tell that to anyone reading a blog, right? About a month ago I was contacted by a NXTasy (may it rest in peace) user, David Bell, about developing a robot that could produce a bar graph style display of CO2 measurements for a public 4-H display. He even offered to ship me all the LEGO parts, sensors, everything needed, & pay for the materials I might need to acquire. Even to compensate me for my time.
I didn't take him up on it.

The reason wasn’t that I was in a mean mood, or that I’m independently wealthy (feel free to throw those tens and twenties this way folks!). It co 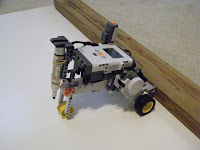 mes down to I do this for fun, and if I can help others out in the process, so much the better… and if we can all do it dirt cheap, fantastic! So instead of them shipping everything to me, and me producing a “product”, we decided to collaborate long-distance. The goal was to produce an NXT-based robot that could draw a series of physical lines in a big display, and to have it all built & working by 2 Oct 2010 for the National Youth Science Day in Walnut Park, Petaluma, CA. David would have the HW, and he worked long-range with the folks at Vernier to interface their CO2 detector (which requires too mu

ch power to work straight off a sensor port) with the NXT. Meanwhile David & I discussed (& discarded) various plans for the robot, and I built a very simple one that could drive around and draw lines on a sheet of melamine. I documented it with pictures, and then emailed him the pictures so he could build a copy, while I wrote a test program for the sensor (which I’d never seen or used). Once we got the sensor working, I wrote a program to get the robot to draw lines, while David tested the sensors responses to establish how well it worked & its limits, providing me feedback in the form of pictures and videos. This design process went ‘round and ‘round several iterations, with me sending detailed commented programs to him and him building a table for it to work on and testing it, before suggestion further revisions to me.
The end result is TurtleBot: a simple basic retail kit robot, that can accept most pens and draw on any flat surface (paper, melamine, etc.), and draw a bar graph of CO2 readings when requested by a user (or on its own), repositioning itself with the help of a long straight wall. The first public test was last weekend, and this coming weekend it will be on display (and sampling your favorite CO2 source) from 1-5 PM at the National Youth Science Day. If you are out in the Petaluma, CA area, please stop by and see it (as well as a lot of other amazing interactive science displays).
The robot is sort of cute, and works really well for what it does (and is built with only the Retail 2.0 kit)… but there are certainly better Turtle-style robots out there (Marty, from the Idea Book 1.0 for instance). But in my opinion, the real coolness here isn’t in the robot.
It’s in the way it came about.
Remember if you get to see it, this is a robot that was developed collaboratively, without any of the principles being able to get to together, and without shipping any materials around physically… because we could prototype it with a simple, easily available modular building system (LEGO), using a very easy programming language (NXT-G), and the ability to network with people literally across a continent.
The robot is nifty. The concept of an interactive display was fantastic. But the ability to pull it all together with a geographically-challenged “group” in a few weeks because of the internet and the simple, easily available, modularity of LEGO… that’s really, eye-opening, amazing.
Go see David Bell and the Two Rock 4-H Club this weekend at National Youth Science Day, in Walnut Park, Petaluma, CA. And wave at TurtleBot for me. I miss it. It never emails me.
Labels: community Sensors

Joraaver Chahal said…
This is genuine stuff. The robot is cool, but better yet, the way you guys communicated long distance and collaborated so fast in order to meet the deadline shows efficiency as well. And that sensor is very practical. Will it come out in the market soon? Because some real live experiments could be conducted with that. I'm in a Chemistry class right now, so using the sensor and setting up my own experiments with it would really help my understanding, the way you two did.

Unknown said…
Nice project.
Remembers me of the Rock and Scissors playing robot you, Jim and me created in a similar long distance collobaration back then in 2006.

I have experienced over the last four years that this sort of projects is working quite well with a limited number of team members (three? four?), but that it's apt to fail once the number exceeds a certain amount (not sure where's the border, but eight seem to be too many already).
Oct 1, 2010, 5:51:00 PM

Brian Davis said…
Agreed - virtual collaboration has some amazing pluses, and also some amazing minuses if you don't end up with the right group or the right structure. I'm not sure what the optimal group size is, but I suspect it has a lot to do with the way the group is structured. For example, the Monster Chess project involved significantly more than 8 people and worked pretty well... but the amount of work each person did was *certainly* not equal, and the people involved are somewhat experienced with such electronic collaboration.
Oct 1, 2010, 9:25:00 PM

Unknown said…
Wasn't there a lot of "real" contact of team members in the Monster Chess project?
I found that one of the hazards of pure virtual (Internet) communication is the lack of visual feedback by the partner in question and her non-lingual signals - a lot of (if not most) of the frictions and problems in pure virtual communication arise from that, I presume.
Hence I take it that projects where the team members meet at least occassionally "in real life" are much less poised to failure than pure virtual ones.
Oct 1, 2010, 9:59:00 PM

Brian Davis said…
There was certainly some "real" contact in the Monster Chess project... but perhaps not as much as you think. An awful lot was done with exchanging photos, LDD files, and programs made in one place and used in another. We also used Google to coordinate some things.

Large-scale internet collaboration can certainly function (ever read a wiki?), but it does take some special coordination, and sometimes a special temperament.
Oct 3, 2010, 3:28:00 AM

Unknown said…
Oh, I decidedly agree! They certainly can work - a lot of successful large-scale Open Source projects do prove that.
And I might add that in addition to a good deal of coordination, large-scale internet collaboration projects need tolerance for drop outs of some of its "cells" (in large wikis, for instance, it usually does not matter whether some of the contributors loose interest eventually).

Actually, the challenges of that sort of projects and its differences to "traditional" ones is a most interesting topic and yet to be explored by the PM gurus. Even more, as future industry will face an increasing proportion of them.
Oct 3, 2010, 8:29:00 PM