Here is a little eye candy just for fun. I was taking pictures of my most recent project (post coming soon), which uses the LEGO color sensor in light sensor mode, and I was surprised to find the following image of its red LED in one of my pictures: 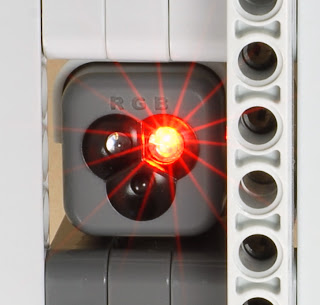 This is not Photoshopped, the star-like rays appeared on their own, I guess due to an interaction between the shape of the camera aperture and reflection/refraction/diffraction between the different lens elements. This is with the red LED shining brightly, as it is in light sensor mode with red illumination (or red lamp mode). The photo was taken at f/16 for 0.8 seconds with fairly bright but diffuse ambient lighting, and a fixed (prime) 50mm lens.

So then I had to try the other colors. Notice how the different wavelengths of light cause different diffraction effects. Or is this just differences in the LEDs themselves? 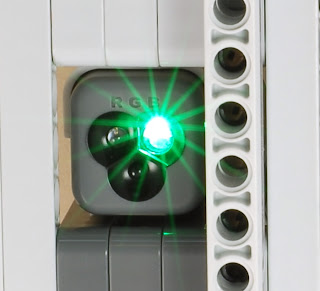 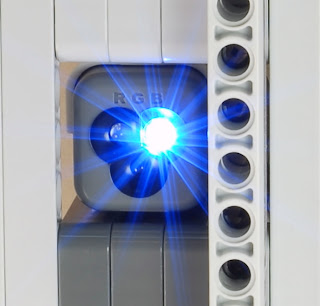 Getting a similar image in color sensor mode, when all three LEDs are shining, was harder, because the LEDs are much dimmer. I ended up getting one in near ambient darkness at f/16 with a 30 sec exposure. Note that larger lens openings make the effect go away. 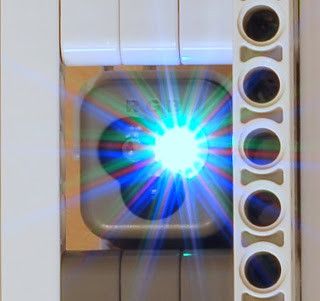 Andy D said…
Very nice photos. Waiting for the model the sensor is attached to.