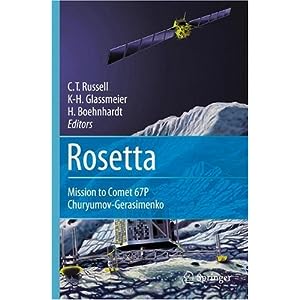 Comets consist of the most primitive, i.e. unprocessed, material in the solar system. To understand the earliest epoch of solar system formation, we must investigate the nature of this material. Much of what we know of comets presently comes from remote sensing using Earth-based telescopes, plus a few brief flybys that have added only a few hours of in-situ observation. The Rosetta mission is poised to make a dramatic advance in our understanding of comets by matching trajectories with comet 67P/Churyumov-Gerasimenko, orbiting it, and setting a lander on its surface. [1]

ESA's Rosetta mission will rendezvous with comet Churyumov-Gerasimenko in 2014. In November of that year, Rosetta's Philae lander will touchdown on the comet and thoroughly investigate its composition.

He then goes on and demonstrates the prototype of the Philae lander he made with his son's LEGO Mindstorms.

Then with help from Steven Canvin from the LEGO Mindstorms Team and other players, a full fledge prototype was built... Here is a fantastic video showing off this prototype:

The feedback from the engineering students on the prototype will be used by ESA, the German Aerospace Center DLR, Europlanet, Lightcurvefilms and LEGO to finalize the Education Kit and adapt it to the needs of European curricula.[2]

Read the full article here.
All video presented here are from the ESA YouTube channel

Unknown said…
Three most interesting videos, with the third one being simple brilliant!
This is education on its best.

Congrats to Steven and the involved team for producing such a gem (wasn't there blog contributor Martyn showing up at the beginning?).
Oct 4, 2010, 2:16:00 AM

That is right, the model was build by three MINDSTORMS Experts:
Gerrit, Eric and Martyn,(me)

I'm looking forward to the last movie, that is where we explain how we build the model.