MakerBot in LEGO... now if it would just clean up after itself 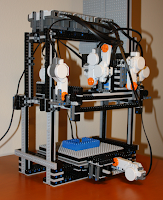 Someone (willgorman on YouTube) has built a nice functional LEGO version of a rapid prototype machine. MakerLegoBot uses standard LEGO bricks to build small models one brick at a time. Inspired by RepRap & MakerBot, this is a fairly impressive implementation using 3 NXT's (yet still looking slim and svelte!). I don't even want to embed the YouTube video here, because a creation like this really needs a nice written description - which they provide over at BattleBricks. Take a look... and if you are going to Zwolle, this should be there as well!

I wonder how far you could take this. A long time ago (OK, 2005), Ian Hendry of rtlToronto built an automated duck assembly robot that was really amazing. It only built one thing (LEGO ducks... but nice cute ones), but did it from raw pieces, not pre-built sub assemblies, and did it with a single RCX. More recently there was the automated car assembly robot, but it was huge and worked with pre-built assemblies. And there have been some similar creations over in Europe, involving tables-worth of LEGO and days to set up.

But here, it's reachable with a much more modest investment in hardware, and at the same time is much more flexible - given it a digital build file, and it gives you a real LEGO brick-built model. Fantastic implementation... and perhaps opening up some new doors for future variations? One can hope.
Labels: MakerBot Rapid prototyping Zwolle

Menno Gorter said…
Quite strange enough there will be another robot like this at LW!
( Search for Dryw Filtiarn on the web... )
In my opinion the one I mentioned looks better, but the idea behind it is the same.
Is this a question of copy and paste?
Oct 19, 2010, 5:19:00 AM

Dryw Filtiarn said…
Make sure to stop by at my creation at LegoWorld, and you will see the next step of this :) Autonomous model building based on LDD models.
Oct 19, 2010, 5:24:00 AM

L3G0Bots Lady (;-p) - V.G. said…
Fascinating, but after the challenge of building such a robot, I would think it would take the fun out of building models with it – the joy of LEGO® building comes from the hands-on (a sort of therapy – smile). However, if you needed to build a lot of LEGO® models for a big project, it sure would go easy on the fingers! Say, I wonder which is faster, the human builder or Makerbot???
Oct 20, 2010, 4:35:00 AM