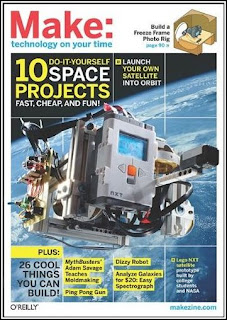 If you're not familiar with Make magazine, now may be the time to pick up a copy (or subscribe - much cheaper per issue). Issue 24 features an NXT controlled satellite as seen here in this cover image. I don't have any more details as my issue hasn't arrived yet, but it looks pretty cool!

Each issue usually has a theme, and this one is Space Projects - 10 of them, apparently.

We all know that the NXT has been launched using high-altitude balloons, but this is the first I've heard of one actually being launched with the intent of orbiting the planet...

Brian Davis said…
Well you've got *me* very curious... I've actually looked into some private launch opportunities, but they were around $8000 a pop, and while it would be cool to get an NXT into orbit, it wasn't (yet!) *that* cool, especially as communication with the ground would be an issue (and to a lesser extent ever getting the payload back). Curious.