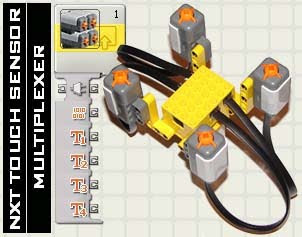 STAAK posted on the Polish LUGPOL forum an nice instruction guide in How to build a touch sensor multiplexer. 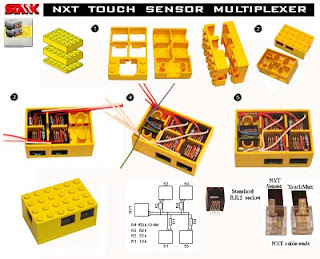 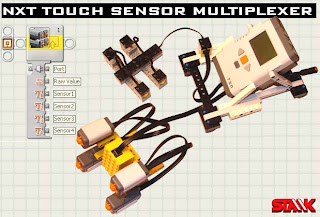 He describes:" For both multiplexers I used resistors with values 32k, 10k, 68k, and 150k. The NXT touch sensor already have a built-in additional 2.2 k resistor.

By design, the two multiplexers (RCX, NXT) will work with the NXT via a single block in NXT-G. Because the use of the internal resistors (and the same precision resistors), I needed to create a block for the NXT-G that allows the thresholds to be set by the user. Normally when you insert a block to the project can be seen only as the left side of the settings. Select the checkbox will show a window for manually setting the appropriate thresholds.

Drop-down box in the left window is used only for viewing a given threshold value.
A threshold value is nothing more than the raw value for the relevant states of the configuration of sensors

The output signal from this block is the four outputs (T1-T4), True / False
where True state of the output indicates that the sensor is pressed.

After setting the threshold check block, save the project.
The Copy/Paste option allows you to insert the block into a new project together with the pre-set thresholds.

The cost of the multiplexer elements was less than 2$ for the resistors
The NXT-G block was written in LabView with the overlay LabVIEW Toolkit for LEGO MINDSTORMS NXT available on the National Instruments.