UPDATE! - Print Your Own Bricks and Technic Parts! 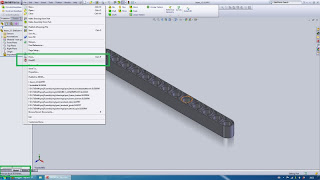 We've all had that problem where we're building a robot or other LEGO design and we're missing a piece. Right? Well... that problem is about to go away for good.

LEGO has announced that it is making the digital blueprints for all of its bricks, Technic parts, and other doo-dads available to LEGO hobbyists around the world. With these digital blueprints (.dxf files are just one of the many file types they'll be releasing), anyone with a 3D printer (such as the MakerBot) will be able to simply load in a brick or other item and print it out! 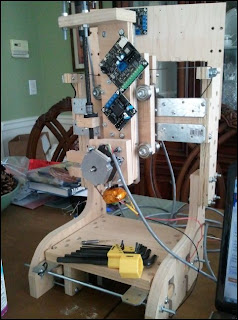 I'm including a photo here of a 3D printer that I'm currently building - I can buy the filament (plastic) in many colors, so I'll be able to print out custom Hassenpins, for example, in purple, blue, yellow, and more!

Again... this is a big day for LEGO fans around the world - LEGO will continue to sell its wonderful kits in stores with plans to offer its own LEGO 3D Printer sometime in late 2011. For now, they're giving those of us with our own 3D printers the ability to print out our own bricks in plastic... but just wait a few more months and LEGO fans will be able to buy their own LEGO 3DP. The ultimate goal, according to LEGO, is to sell digital blueprints for all its kits to the consumer and have them print the kits out at home - it will be a bit of a shock to see LEGO kits disappearing from toy stores, but just being able to download a kit's parts list and print them out on your own - TOTALLY WORTH IT!

In addition to making the files available, there are also plans to install 3D printers in all LEGO Stores over the next 12-18 months - customers will be able to go in the store, select the parts they want, and have them printed out immediately.

We'll let you know as soon as we get our hands on the first batch of digital blueprints!

UPDATE: Well, it turns out that LEGO is turning off its machines on August 1, 2011 - from that point on, it will rely on 3D printing sales from its LEGO stores and sales of downloadable blueprints for its LEGO 3D Brick Printers. LEGO will begin selling smaller versions of its 3D printers to customers (rumor has it prices will be around $500 or so... not bad) in September 2011 and plans on offering plastic filament (to melt and print with) in all the standard LEGO colors.

ronmcrae said…
Hopefully they'll include the DXF for the NXT upper panel. That should let us come up with some colorful robots!

Laurens Valk said…
It's a great initiative. This should save the environment as well, eliminating the need of transporting big LEGO boxes worldwide.

Just get some ready-for-print plastic at the supermarket and there you go.

I'm in the beta program for this idea... Now that the word is out I think I can share some pictures as well. I'll email them to you, Jim, so you can update the post with it if you want.

Currently they're still using Solid Works as a standard, but they're planning to enable a print-and-go function in LDD.

Unknown said…
Well, it's not official yet, but my channels in Billund tell me that there will also be the opportunity to just upload an LDD or LDraw file to the devices installed at each LEGO® store and it will instantly produce all the parts you need for the model, for you to take along.

Andy D said…
This might be OK for just one or two missing parts, but if the printer is as slow as other 3D printers I would not want to print out an entire set as it would take less time to just order and wait for UPS to deliver.

Will it run on Mac OS or is it just Windows?

aerotd said…
Really, this doesn't seem like such a great idea to me. The reason we only buy LEGO bricks and not the cheaper ones is the quality. We have gone thru our entire collection of millions of bricks and thrown out all the cheap imitation bricks because they just don't work as well. I cannot imagine a 3D printer that can produce the quality we are used to. I really hope LEGO does not switch to this because they will lose a lot of customers. The quality control on a printer (especially a home-made one) is just not there.
Apr 2, 2011, 6:32:00 AM

222Doc said…
:) I built a prototype unit that can do smaller parts and is made from Lego and programed in NXT-g, I have a few bugs though the heated element that melts the wire abs is melting the robotic arm piece as well as it feeds out and well the parts have this marbled look umtil the arm part is consumed and falls apart. perhaps wood?

Paul NeoStormer said…
Been printing out custom LEGO parts on the ABS 3D Printer at New Mexico Tech, they take a while but are well worth it. No airtight though, so pneumatic parts are out of the question.
Apr 2, 2011, 2:57:00 PM