Skip to main content
Labels
Posted by Brian Davis May 01, 2011

Claude Baumann and his students have produced yet another outstanding combination of LEGO engineering, digital hardware prototyping, and innovative programming. Taking inspiration from some of the LEGO boats that have come along in the past, the team set out to make a LEGO boat that could cross a significant sized lake. The result was Serendipity, a autonomous waypoint-navigating craft with a custom GPS sensor.

In their normal fashion, they've provided
a detailed log of their progress on this project, from beginning to end - and it's something I'd really suggest any budding engineer (LEGO or otherwise) read. A lot of people look at an end result and are amazed by it... but the really amazing thing to me is the process to get to it. The inspiration, the wrong turns, the problems anticipated and the surprises learned the hard way. Claude's team has done an admirable job documenting all this, and for anyone who's been involved in such a project it's enlightening to see (and a great way to teach young engineers).
The basic boat was a simple catamaran using two of the stock LEGO motors at the rear on a pivoting mount as a sort of "powered tiller". With a compass to determine the boat heading the only thing they lacked was an absolute positioning system... so they made their own GPS sensor. With this they programmed the boat to do a waypoint navigation on the surface of a large reservoir... it work work flawlessly! To put this in context, the Serendipity is about 38 cm long, and traveled an 800 meter course from shore to shore. 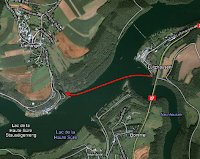 That's the equivalent of a 16' boat traveling more than 16 miles (2,100 boat lengths). Not too shabby, especially considering that waves to not "scale down" nearly as nicely, so while it seems to have been a calm day... those are still significant waves for such a small boat! It also points out the efficiency of the LEGO boat motors: two of them (each running on a single AA battery) had enough power to thrust continuously for 40 minutes. I'm not sure what the total running time is... but it's clearly significant, and that was pushing the boat at good speed!
There's also a nice YT video of it up, if you want to see the "movie version". Now, if I could just get a calm enough lake and a GPS sensor... well, if I didn't have ideas before, I certainly would now :).
PS- There will be a series of boat races again at this years Brickworld event in Chicago, so there may be more of this "risking LEGO inches above the water" coming in the near future.
Labels: Boats GPS