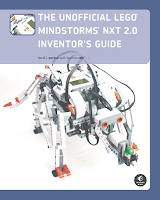 One of the robots that's described in the Unofficial LEGO MINDSTORMS NXT 2.0 Inventor's Guide is the Printer. LEGO plotters aren't new, of course. However, in designing it, my goal was to build it with just NXT 2.0 pieces. This took a couple of redesigns, because I kept running out of beams.

The machine works with both A4 and US letter paper size, and can be adjusted for a wide variety of pens or pencils. Building and testing instructions, as well as sample programs are found in the Inventor's Guide.

I've demonstrated this machine on several events, including at the FLL finals in Delft. For those who haven't seen it, here's a video that shows the machine plotting the NXT 2.0 Logo.