This robot was designed, manufactured and programmed for a design competition (as part of the curriculum) held amongst first year Mechanical Engineering students at Delft university of Technology.

The goal was to create a robot that could deliver a tray of drinks as quickly as possible, while also keeping as much as possible of the delivery on board.

Our design didn't win an award for fast delivery or keeping most water on board, but we did win the Delft Science Centre award because our design has the most potential for actual usage. Out of 50 teams competing, we built the only robot that could steer and navigate its route.

50 teams with 8 members each took part in the competition, resulting in a wide variety of designs. There weren't many strict guidelines, except for some dimension limits. One major constraint was that forward motion could only be done with a supplied cordless power drill.

Designing and manufacturing was done in approximately five months. All of the components were carefully designed in SolidWorks (A 3D CAD tool) and we manufactured each part later on.

I will upload a set of pictures of this design and other competing designs later this week. 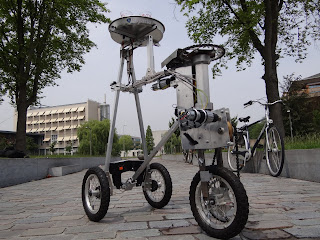 NickNackGus said…
If you participate in this project again, you might want to make the plate of drinks tilt in the direction the robot accelerates (into curves, forward if speeding up, backward if slowing down). If you get the cups to tilt just enough, the force of your robot's motion will be combined with gravity to push the drinks towards the now-tilted cup base. Physics are a prerequisite.
Jun 20, 2011, 9:33:00 PM

It's a direct result of the balancing program.

Thanks for the suggestion though :)

Robotica said…
looking great, long time ago we also found that a three wheel drive steer robot works great.
the design you did looks a bit top heavy casing the spill? but all in all seen the constrains I' m impressed.

The tray had to be delivered at a 1.10 m height. Lower could have been an option, but next require a lift construction.