PackBot - Deja Vu all over again

A long time ago (back in Jan 2007) I posted about a robot I had built based on iRobot's Packbot. This morning, I received this wonderful picture. It shows LNE/Packbot next to a military Packbot. Which is just... well, really cool. 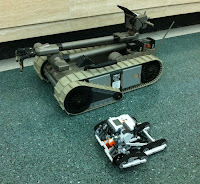 Let's just soak in that picture for a moment.
OK, moment's over.
However there's more to this picture than a fun (& really really old... more on that in a minute) robot. This robot isn't mine. I've never touched it, or even seen it in person. It was built by Joe Meno (who writes Brickjournal), using on-line plans I put up on Bricklink. He was having trouble programming it, which he mentioned on Facebook, and we then started emailing back and forth, trading NXT-G programs via YouSendIt. He had to leave for the event he was displaying this at before we were finished, so a portion of this conversation and troubleshooting was done while he was literally on the road. He wanted to show this to some of the folks that work with the real thing, and I couldn't be more happy about that.
The robot cost about $200 in hardware (the LEGO one... you don't want to know what its big brother behind it costs). The fact that I now, finally, years later have a picture with Packbot next to its inspiration is worth far more to me. The fact that all this was done remotely, using commonly available and free tools on-line, in a collaborative process with other AFoLs... is, as they say, priceless. This could have been done with NXC instead of NXT-G, or using plans generated in LCAD or LDD, and presented on-line at Flickr or NXTLog or MindBoards, and the communication could have been via Skype, Google Wave, or community-wide at MindBoards forums or any number of other mechanisms. Joe even mentioned how impressed he was with the way I routed torque through the center of the large Technic turntable to power the "Flipper" treads... which is a trick I was inspired on due to another AFoL, the remarkable Jennifer Clark, who was posting LEGO models of construction vehicles so realistic (in both form & function) that they might as well have been the real things. So this is a collaboration spanning multiple people and multiple years (decades!).
On a slightly different note, this has been a remarkably long-lived robot for me. While testing a program for Joe (the wonders of LEGO... commonly available identical HW platforms are really useful), I pulled out my version of LNE/Packbot which dates back to mid 2007. So it's a LEGO robot that has not had any* parts replaced or changed in at least four years, having been shown for multiple hours on multiple days at various Brickworld events, tested and played with at home, and "torture tested" outdoors in sand, grass, snow, and ice. The motors have never been changed out... yet with all this use (& abuse), it is still running and working hard. LEGO is great for prototyping. And, evidently, for a whole lot more.
Labels: community PackBot

Brian Davis said…
Oh, and that little footnote about everything being original? Yeah, not everything. The 8t gears that drive the big turntables were actually replaced during a show by Bryan Bonahoom when he realized that the high torque was literally warping the teeth right off them. So in terms of longevity, at least these motors have exerted enough torque over their lifetimes to completely trash at least two 8t gears... an impressive accomplishment in a number of ways.
Sep 25, 2011, 4:10:00 AM