A subjective NXT retrospective to 2011

2011 is drawing to an end, and it's a tradition to have a look back at this time of the year. With THE NXT STEP, the focus of such a retrospective naturally is on LEGO® MINDSTORMS NXT; so I thought about my very personal annual highlights in that regard. 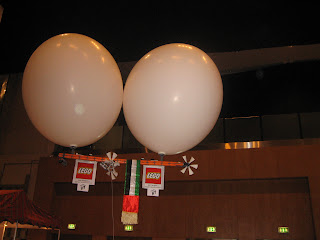 It was an amazing NXT year, to be sure!
After being 5 years on the market now, instead of cooling down LEGO® MINDSTORMS NXT seems to gain even more momentum every year.

Hence, there are a lot of candidates for "The NXT Model of the Year 2011", and most likely everyone will have his or her very special favorite.
As for me, I did not have to ponder long over the one I personally like best:  the outstanding Blimp of the two Danish NXT dudes Lasse and Kenneth (see left). A great project, even more when one had the privilege to face it "in realiter" (as it was granted to me at WRO).

From there, it is not far to my very personal "NXT Photo of the Year 2011"; it shows Lasse helping an Arab boy controlling the Blimp at said WRO in Abu Dhabi - a photo that in my opinion notably conveys the spirit of LEGO® MINDSTORMS NXT.

Lasse Lauesen said…
Love your choise Mathias, thanks allot! I also love our blimp, but if i should choose one that i didn't help build, i think one of the coolest designs of 2011 is the Flexpicker designed by Chris Shepherd. I like it because of it's complexity both in build and programming...
Dec 30, 2011, 10:34:00 PM

Menno Gorter said…
Of course I agree with the Blimp as first choice.
I like out of the box and well constructed creations.
Even the name Blimp fits perfect. ;-)

Of course I can't beat that with my creations.
Though I tried hard to make something very special and NXT-related for the cover of Hispabrick Magazine #010. ;-)
( Which was totally neglected here sadly enough .... )
Never mind: I hope to blow some wigs off at Copenhagen before the Blimp does... :-)
Dec 31, 2011, 8:04:00 AM

Damien Kee said…
Sorry Menno we missed that one. We're always on the look out for new NXT creations.

Rather than complaining in the comments like you have the last few times, please let us know about your creations so we can tell the world! :)
Dec 31, 2011, 8:14:00 AM