The NXT comes with a nice collection of sensors that most Mindstorms fans, kids and adults, have figured out. Most anyone who has spent any time tinkering with NXT robots has figured out how to use the Touch, Ultrasonic, Sound, and Light sensors among others. You build your robot, program it, and run it... and watch the results, whether it's avoiding walls, following a line, or catching a ball.
But as with most NXT robots, the robot is typically running while you're in the room, so to speak. Many have designed robots to automate certain tasks while the owner is away, but it's not the norm. Yes, our NXT robots are autonomous, but they more often than not require a human presence close by to monitor the action. For anyone wanting to give their robot real autonomy and an ability to communicate with its owner no matter where that owner may be... well, that's been complicated. Yes, you can do it, but it often requires some serious electronics skill to wire up a separate circuit that can communicate via Twitter or maybe posting data to an HTML website. What's been needed for a while is the ability for our NXTs to let us know what's going on when we're no where close by... maybe even on the opposite side of the globe. Imagine wanting to build a small NXT device that detects when your bedroom door is opened (or closed) using a Touch sensor or maybe the Ultrasonic sensor and alerts you with a text or email message. Again, not so easy to do with a basic NXT kit.
Until now. 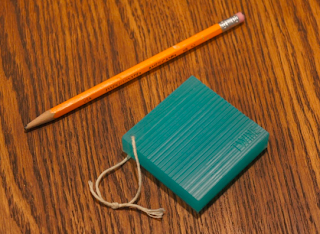 If you've got a nice collection of sensors for your NXT, you might be interested to know that a new Kickstarter project has a device that's being funded (with your help) that will allow your NXT to communicate with you via email, text messaging, and a few other options. It's called Twine, and it's a small, battery operated device (waterproof, too) that has a built-in motion sensor and temperature sensor. You configure the "rules" for the sensors using an online, cloud-based application the Twine team has created called Spool.
Let's consider the idea I mentioned above -- a detection device that lets you know when your bedroom door is opened. You'll first want to build a robot that will detect that door being opened using maybe the Touch or Ultrasonic sensor. Easy enough. But here's the trick -- you'll also want to build a small, flat bed on your robot that will rock left or right when the door is opened. On this bed you'll place the Twine device that you've configured to send you a text message (or an email) when the built-in motion detector is triggered. How easy is that? 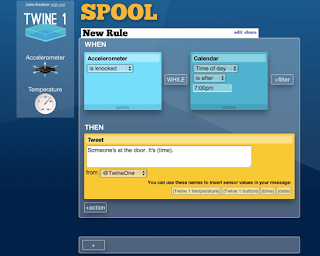 Twine developers are busy creating a number of other sensors that will be able to be plugged into the basic Twine device, but you'll also be happy to know that they're offering a breakout board add-on that will allow external sensors to be wired in -- you probably won't want to break open your NXT sensors and expose the wiring, but... you can. With the breakout board, I imagine someone would be able to easily wire Mindstorms sensors directly to the Twine device.
But if you prefer not to open up your sensors, the Twine device by itself offers up lots of options:
1. Use the Light sensor and the previously mentioned "flat bed" to trigger the Twine when the Light sensor detects a light being turned on and get a text message sent to your phone.
2. Use the Ultrasonic sensor and "flat bed" to trigger the Twine's motion sensor when the Ultrasonic sensor detects the food level in your dog's bowl is too low. When it gets low, you get an email saying "FEED ME!"
3. Want to know if your little brother or sister disturbed something in your room? Put it on top of a Touch sensor that triggers a slight movement of the Twine and have a Tweet sent to your Twitter account telling the world "My nosy brother/sister just picked up my guitar."
As the Twine team releases more and more sensors (a few are already in the works, including an IR sensor) you can expect the Twine device to open up a lot more options for your NXT robots to communicate with you while you're away. Yes, the NXT isn't doing the actual communication, but if you've built a solid robot that can trigger whatever sensor (motion, temp, IR, etc) is connected to the Twine, you can rest easy knowing you'll get a text or email or Twitter message letting you know that something has occurred while you were away.
Now, the basic Twine is $99... not cheap. But then again, neither is the NXT. If you've been looking for a way to give your NXT robots a way to "talk" to you when you're not around, this is definitely one of the easiest ways to do it. At the $115 level of backing, you get the breakout board... higher levels provide you with additional sensors. But the basic Twine at $99 will automatically provide you with temp and motion sensors built into the actual device.
Now here's the bad news -- the Twine Kickstarter project only has 17 hours left as I write this... less by the time you're reading it. They've already raised enough money for the device to be built and shipped, so all that's left is to get more backers who want to get one (or more) before the time expires. The team hasn't said when the Twine will be sold to the public yet, so this may be your only chance to grab one without having to wait a long time. Delivery of the Twine device is estimated to be in March 2012, and I've already got my backing in place to grab one (with the breakout board).
I'll be interested to hear what others think they might use the Twine to do in collaboration with an NXT robot.
You can read complete details of the project here as well as watch some videos.