There is huge news coming out of the International Consumer Electronics Show in Las Vegas with LEGO unveiling the next generation of their LEGO Robotics lineup.  This new product, designated EV3, has been released to coincide with the 15th anniversary of the launch of the first MINDSTORMS product.

There are 5 fantastic looking models with instructions straight out of the box (mohawk looks really cool),but just as with the NXT and the RCX before it, you are only limited by your imagination.  Building instructions that come with the kit are in 3D format, so you can virtually zoom and rotate them to figure out exactly where each piece goes! :)

It looks like on-brick programming has been considerably expanded, which means you can do plenty of programming without the need of a computer. 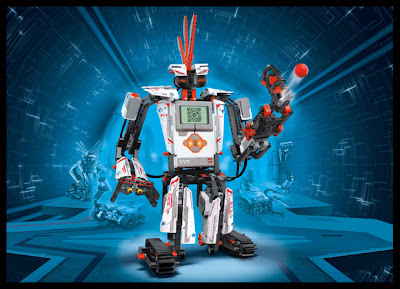 
Currently listed as available in the latter half of 2013 with a suggested retail price of US$349.

More info here - www.LEGO.com/mindstorms
There is a educational version in the pipeline, with more info being posted here as it's released. www.LEGOeducation.us/MINDSTORMS

Stay tuned!  We'll be updating as we get more info.  Fingers crossed we'll get some real life shots from the demos being done in Las Vegas.

What are your initial thoughts?  Let us know in the comments.
Labels: EV3

Clinton Blackmore said…
This is very exciting, Damien! The changes are all very welcome. I could almost go through point-by-point and say, "Awesome!". Open-source firmware -- great! Backwards compatible ; new sensors; build-friendly control buttons, and more of them; more space and power. This is great.

xszolix said…
I am excited, and happy, but a litle disapointed. I hoped they put in some advanced sensor giro/compass or a new sound sensor.
They just replaced the ultrasonic sensor with this infrared one.

The small motor is great. But just with 2 normal motor?