The Kid with the Timmyton 3.5! 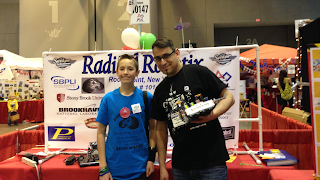 Back in February when I was at FIRST I met with lots of bright kids at the MINDSTORMS booth but they where mostly asking me questions about upcoming EV3 and my WALL-E robots. The Next day I decided to drive my robot around and visit surrounding FLL teams booth this is when I came across the Radical Robotix Team 10147 member Kyle Markland who talked to me about his personal robot he was bulding, the Timmyton!  He said he would send me more details and a few days ago, he did! 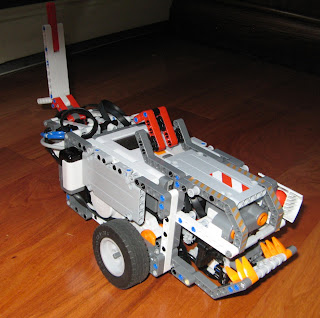 Hello... we met at the World Festival. I was the one who told you about my NXT robot, the Timmyton 3.5. I wanted to inform you that I finished an upgraded version, the Timmyton 4.0. It has similar functions as the last model, but the mechanics are very different and all of the last model’s flaws have been resolved.
I attached some pictures of the 4.0 above. If you want all of the details, you can find a complete rundown of both the Timmyton 3.5 and 4.0 on my NXT Log page. Just type in Builderdude35 in the search box and all of my NXT creations should be there.*

I found his robots and enthusiasm very inspiring and so I asked him to write me a short Bio... I felt like at the dawn of the EV3 Launch, why not share his story with you!

​Hello everybody, my name is Kyle Markland. I am 13 years old and I'm very passionate about building NXT robots. I was first introduced to LEGO MINDSTORMS three years ago when my school bought two NXT sets for the gifted program. Unfortunately, my fellow classmates didn't quite like the idea of “sharing” and as a result I never actually had a chance to do anything with it. This only made me more determined to get my own.

​I saved up my money and about a year later, purchased my NXT kit. When I got it I realized just how much I could actually do with it. My first creations weren't that great because I was unfamiliar with the Technic bricks. I learned how to build by looking at my other Technic sets and thinking about what theirs had that mine didn't.


​Fast-forward two years; my school has formed a FIRST Lego League team. I helped lead the team to first place in the Long Island regionals in our inaugural year and we were invited to the World Festival. We competed and interacted with our peers from all across the world; it was a great experience!

​I am proficient with building and mechanizing my NXT creations, but I'm also trying to create more complex software programs. I've always wanted to build a 4-speed automatic synchromesh transmission but I'll need to improve my programming skills a little more. I would like to build an advanced NXT car that incorporates everything I've put into my previous cars. I am also trying to expand my horizons by building things other than vehicles and building robots that are more autonomous.

I am also eagerly anticipating the arrival of the new EV3; it would make building these creations much easier!

Kyle on the new MINDSTORMS EV3

One of my favorite things about the EV3 besides the 4 motor ports and the IR control/beacon is the new medium size servo motor. I read on the Lego Education website that it spins @250 RPM while still delivering 8 Ncm of torque. I think it might make a good drive motor for my racecars because the power comes out the front and I can mount it longitudinally. The older NXT motors are difficult to fit into most vehicle profiles because the power comes out the side. I’d either have to place it upright (like in the Smart cars) or have it stick out the side.

One last thing, are you Lego designers telepathic? It seems that every one of my gripes with the NXT has been resolved in the EV3 kit. (Not enough motor ports, not enough memory, not enough gears in the base kit, not enough Technic panels, having to purchase the remote controller and sensor separately, etc.)

Haha I wish, to that I responded "We MCP's have been giving feedback to LEGO for the past 3 years... some things we didn't get (like backlit display) but many other we did get (like a smaller encoded motor, usb client etc...) I'm glad you like the new retail EV3 and I really hope you manage to put your hands on the new set.

Thanks for sharing with us all of your great robots via this video compilation make just for The NXT Step, I sure hope it will inspire many others to film and post their creations online.