Today we have a guest blog by Cyrus Cuenca

Hello, my name is Cyrus Cuenca. I am 15 years old and have been an avid LEGO MINDSTORMS fan since late 2012. I got my first MINDSTORMS(NXT 2.0) kit on Christmas 2012, opened the kit the next day, and immediately started building the Alpha Rex model because, it "looked cool". I learned quite a lot as I constructed my first MINDSTORMS robot. When I finally got Alpha Rex working, I played around with it for an hour or two then deconstructed it and began experimenting and building my own robots. In 2013 I started my blog to document my creations @ The Teenage Maker. I continued to post my robotics creations on the blog (I still do) ,then I joined the LEGO MINDSTORMS EV3 Facebook group where I met a ton of awesome MINDSTORMS fans. I recently started my YouTube channel where I post videos for my creations. I hope that my work will inspire other MINDSTORMS fans like those who've inspired me. 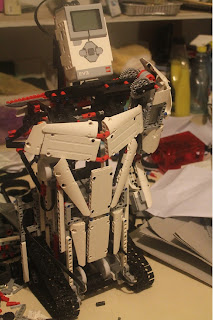 Recently, I completed Z3US, a robot I have been working on for the past year or so. Z3US is, in my opinion , my best MINDSTORMS creation to date. Z3US is a humanoid robot, built with both LEGO MINDSTORMS EV3'S and NXT'S. Z3US can move around via tank treads which are controlled by an NXT joystick remote. Also, Z3US can mimic movements of the right arm via an EV3 EXOSKEL3TON. Z3US uses a total of 2 NXT'S and 2 EV3'S (including remotes).

This is a video on my YouTube channel I created for Z3US.

This is a more detailed video on my YouTube channel for Z3US.

One EV3 is used in the EXOSKEL3TON, which was inspired by Daniele Benedettelli's exoskeleton. The second EV3 is the EV3 which mimics the movements of the EXOSKEL3TON.

This is a video on my YouTube channel for the EV3 EXOSKEL3TON.

Here are some more details and specifications:
With arm resting, Z3US is 65 studs high X 39 studs wide.
The whole project, including remotes, uses.
Here is a list of links to my blog, social media pages, and my YouTube channel.
I would like to thank those in the LEGO MINDSTORMS EV3 group on Facebook who helped me out. Also, I would like to thank bazmarc for all the help and support.