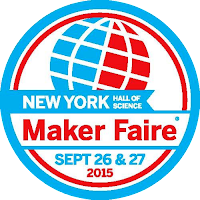 For a second year now LEGO MINDSTORMS was a sponsor at the World Maker Faire  event in New York at the  New York Hall of Science. They had a kiosk along Robot Ave, a nice corner booth nearby other robot kit manufacturers. Besides our community manager and Lee Magpili, that flew in from Denmark this year's team was composed of several MINDSTORMS experts from the community, LEGO Store staff from the area and had the pleasure to have Tim Courtney from LEGO Ideas joins us for the fun. Let me describe to you some of the amazing creation found at "our" kiosk! First off we had the amazing Wall of Fan a giant wall of fans that turn on as you walk by them. It about 8 feet high by 12 feet wide made from LEGO Technic and 15 MINDSTORMS brick. That wall has popped up all summer in New York and WMF15 was one of it's final destination for this year. For me it was the first time seeing it in action, pretty funny considering I was involved with the design and building it earlier this year. You can find out more by following the #realLEGOfan hashtag. 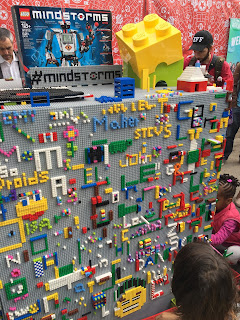 Another amazing creation was the LEGO Graffiti Cube designed by Andy Milluzzi, this was a spin off idea from last year when we covered a crate in baseplates and created the first graffiti cube. His design however folds up inside a smaller crate itself used as secure storage. We parked it behind the tent and it was really practical for storing our personal things during the event! As usual we had large amount of play bricks so every one could chip in with some LEGO art. 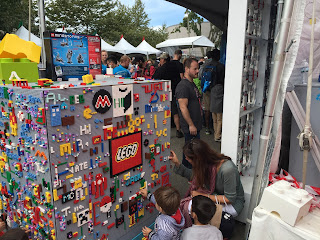 Of course Andy also has some MINDSTORMS creations, one of them was a work in progress BayMax but he had some issues with the inflating system so we didn't get to see it in all it's glory however he has a really cool GoPro steady cam that the public really enjoyed seeing. Another great example of MINDSTORMS being used to prototype real life robotic things.
Then we had Ralph Hempel with a really neat String bot inspired from FB fellow MINDSTORMS Expert from the Netherlands, Anton Vanhoucke. He had it set to draw a Beetle car among other things.


Will on the other hand had in interesting robot that could play any Android app for you. He had it setup solving Sudoku puzzles all weekend!

I was there with EV3LYN which you can see more of on her own Facebook Page here, but my new robot I made for Maker Faire is the EV3Dprinter, a simple 3D printer made from a low cost 3D pen and some LEGO Technic and MINDSTORMS of course. The programming for me what the most challenging part of this project and possibly the most important i wanted to be able to print some geometrical shapes like polygons. I got some help from fellow MINDSTORMS Expert from Germany, Thomas Madeya. Together we managed to create the first LEGO MINDSTORMS 3D printer that does Stars and little xMas tree wonderfully ;) It also has it's own Facebook page here.

This year again we had to honour to have Kyle aka Builderdude35 with us and once again he impressed all of us with his latest creation, Grunt! check out the video he made of this robot.

In case you are new to this blog, Builderdude35 is also the guy behind some great EV3 tutorials, make sure you watch them all on his Youtube channel.


Speaking of lessons this year we had the one and only Seshan brothers aka by Droids Robotics from EV3Lessons. These 2 kids, Arvind and Sanjay and their mom, Asha certainly rocked the booth with their amazing robotic projects, knowledge and enthusiasm. I met them in St-Louis when they passed by the LEGO booth earlier this year but nothing like spending the whole weekend with them, it was really fun.
Check out their Youtube channel for a wealth of information on EV3

Then we had Justine, a LEGO store employee that came to help us but she impressed us with a fabulous creation, the Music Box, mixing LEGO Themes and MINDSTORMS!
She was also model for Lee Magpili special robotic dress which also caught the attention of Make magazine ;)


Mark and Lawrence, also LEGO store employee where demoing the hero models and contributed in answering many parents question about the product.


Last but not least, a very special guest from Colombia, Carlos Arturo Torres of Umeå Institute of Design came to present his IKO project : a creative prosthetic system designed for children to explore and empower their creativity in a playful, social and friendly way.
Carlos, Kyle, Victor TY a winner from the Are you a LEGO MAKER contest and myself where also part of a discussion panel - Using LEGO as a prototyping tool, under the MAKE ELECTRONIC tent. It’s always fun to share our passion with and audience!
All in all this was an amazing event and thanks to all who helped at the booth we managed to create #MINDSTORMSMAGIC to many of the 95000 guest that came to World Maker Faire 2015.