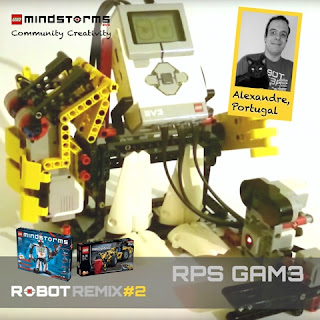 A couple of month ago we presented you with the 4 videos of the Robot Remix series 2 and promised some building instructions. Already Mike's MONK3Y HEAD was published last week and today we are happy to present you with the EV3 version of Rock Paper Scissors!


Since Alexandre is the one who built his own BI's we asked him if he could explain to us the tools he used to create them. This is something people often ask about and some may be surprised as to how many steps are actually involved for making high quality Building Instructions.

"Let me tell you, around 90% of the instructions work was done with applications that use the LDraw system. First I reproduced the model using MLCad (the LEGO-oriented CAD program I've been using for the longest time), at the same time doing some basic parts division in steps and sub-assemblies. MLCad isn't that great, however, when it comes to linkages and weird part angles, such as those in the large hand's fingers. LDD is much better in that respect, so I used it to model that portion, which then I imported back into MLCad. For the electric cables, I used a third application: LDCad. It has nifty functions for generating cables that connect in the right places and get routed through the right places.
I then passed the model on to LPub. The first thing I did was to set the page size to A4 and landscape, because that influences everything else in the instructions. Before making the instructions for this robot, I only had a slight idea that LPub was able to combine several steps in a single page (via the "Add Next Step" command) and produce sub-assembly call-outs (via the "Convert to Callout" command) like official LEGO instructions. Making these instructions made me learn about these nifty features: from the initial 116 pages (excluding cover and parts list) when I started working on the instructions, I managed to shrink them to 49 (with cover and parts list)!

The cover page was done in a different style, rendered in POV-Ray. I converted the LDraw model to the POV-Ray format using L3PAO, which is actually a graphical interface for the converter itself, L3P. Normally I normally use radiosity in POV-Ray, which makes the models look nicer, but, as in this case the render needed a transparent background and for that radiosity dulled out the colours (LEGO models should have vibrant colours!), I preferred this time to do a "traditional" render. I believe it still looks cool, nonetheless!

A valuable advice from fellow MCPs when they reviewed an early draft of the instructions was that they were correct, but difficult to follow for kids. As an AFOL who grew during the age of Technic instructions with around 20 parts per step, this advice was a big paradigm shift. During this phase I went back and forth between MLCad and LPub, moving groups of parts into sub-models (and then call-outs) to make the building process easier to understand. Still, there are a few things I'd like to have been able to do to make the instructions clearer: namely parts "moving" between steps (such as long pins with bush 32054 being initially half-inserted, then later fully inserted when the module they secure gets added), or zoomed portions of the model image to clarify a detail of the assembly. These appear in official LEGO instructions, and I'd like to know how to do that. Maybe in a future #ROBOTREMIX?
I learned a lot and enjoyed making RPS GAM3 and its instructions, and I hope you'll like building it, programming it, and playing with it too!