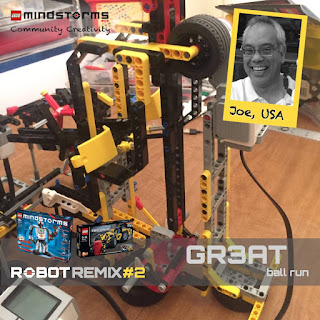 If you recall, a few month ago we presented you with the 4 videos of the 2nd Robot Remix and so far 2 of those 4 remix BI's have been published here. Now for the 3rd Building Instructions of series 2 we have a great ball contraption (GBC) by Joe Meno. Lets hear how Joe came up with this idea for Robot Remix 2.

I submitted my idea for this remix based on one thing: The Mine Loader set had a barrel that could be split into two buckets. Based on that, I wanted to make a ball machine that could move balls through a path and the recycle the balls back to start. What I had in my mind was something like a Ferris wheel, where the balls would be lifted to the top in a big wheel, and there would be a bucket on the bottom to pick the balls up when they finished the path. Rotating the wheel would move the balls from bottom to top.

What really happened was quite different. It didn’t take long after starting to build that the Ferris wheel was not possible. What was possible was an elevator lift to move a ball from bottom to top, and then devising a switch to move the ball between two tracks. This was made possible by the discovery that there was a part that could catch a ball perfectly. That became the switch, which was powered by a motor. A light sensor would provide the accuracy needed to place the switch to catch a ball. This was the biggest achievement for me - making a reliably accurate switch.

The two paths also were challenges onto themselves - one was a conveyor, and the other was a simple path. Both used a slight slope, but one had to use the available parts to make a curved track. This was done using liftarm parts, but there was constant adjustments to make sure the ball would go down properly. The other one was motorized, but had to be slow enough to catch the ball. Too fast, and the ball would just skip the tracks and not move forward. The return track was a set of axles that were adjustable, but it took a few tries to get the track set correctly.

The hardest problem to solve was the bucket. It turns out that the bucket is a bit overdesigned - the inner edge has a lip that is just enough to stop a ball from falling out, even when tilted. It took many tries and many different versions of the bucket’s interior before it reliably popped a ball out to the top track.

All in all, it took a week to build the preliminary build, then another two weeks to refine the contraption and its components. Programming took a steady week of running and testing and troubleshooting.

The result is a contraption that is mechanical as well as robotic, with some bells and whistles for show (well, motor pistons and a twirler). Once it’s set up, it’s pretty neat to watch. Hope you have fun building it!    ∆


Click here for the GR3AT Ball Run BI pdf file --> http://lego.brandls.info/random/gr3at_1.pdf
Thanks to Robin Dai for his amazing work in making these building instructions.

Click here for the GR3AT Ball Run EV3 project file --> http://lego.brandls.info/random/gr3at.ev3
Thanks to Mike Brandl for hosting all of the RR2 files on his server.