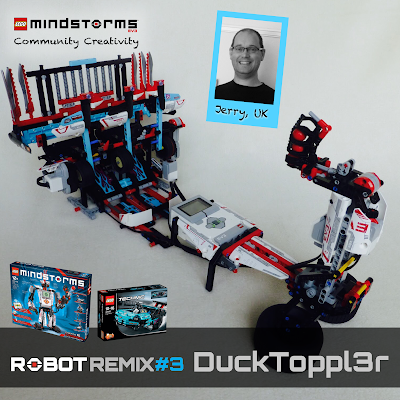 Guest Blogger Jerry Nicholls from the UK tells us about the design and challenges he faced while developing the DUCK TOPPL3R for the MCP Challenge, ROBOT REMIX #3: 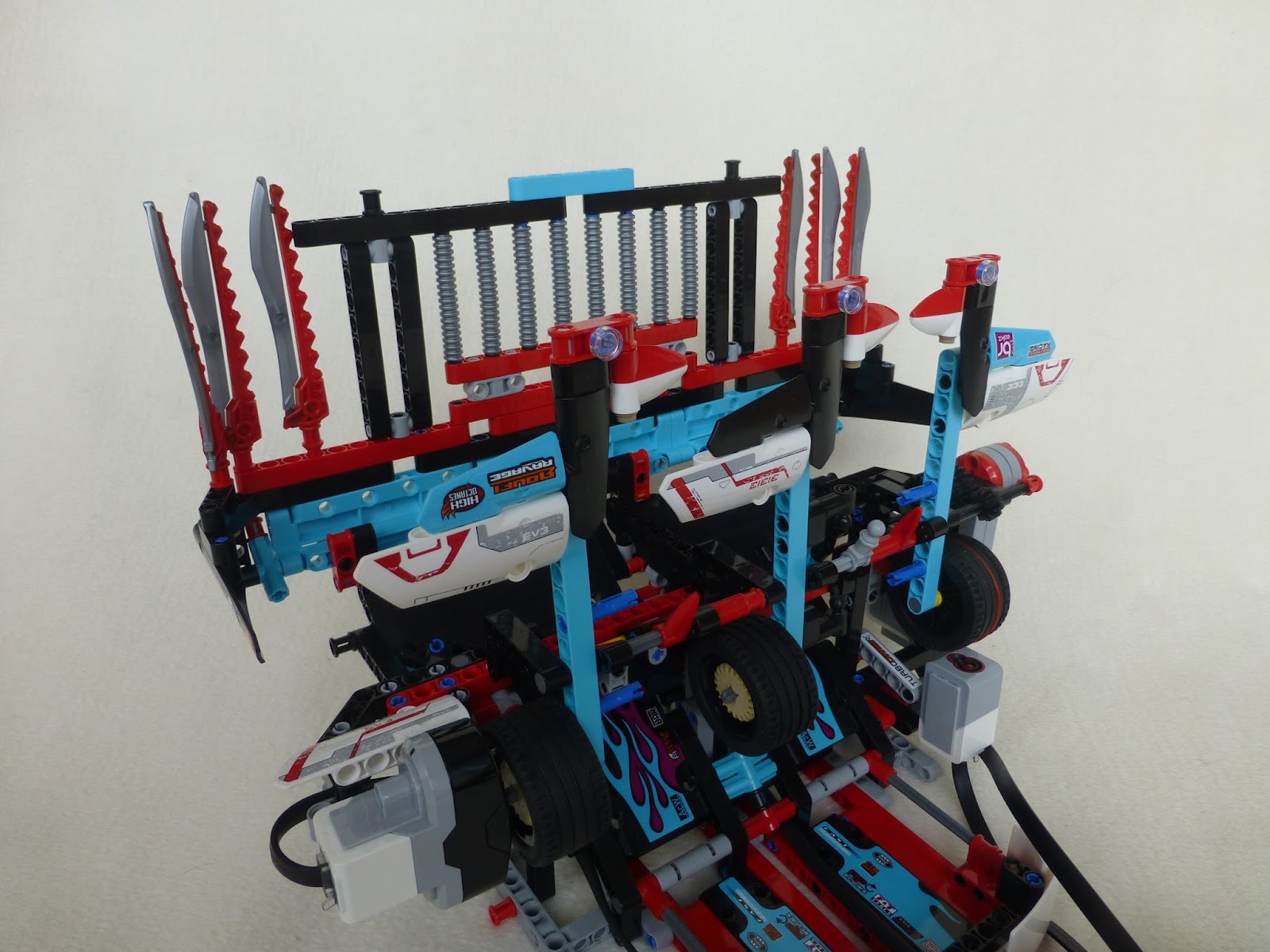 When it came to considering what I’d build for the RobotRemix3 I was inspired by the colours and decals of the 42050 Drag Racer kit to develop some form of “carnival” game. I had some early ideas, which I soon abandoned, but very quickly came up with the idea of using the ball launcher from the EV3 kit to use for some form of hand/eye skill game. This in turn lead to the proposal of the DuckToppl3r. 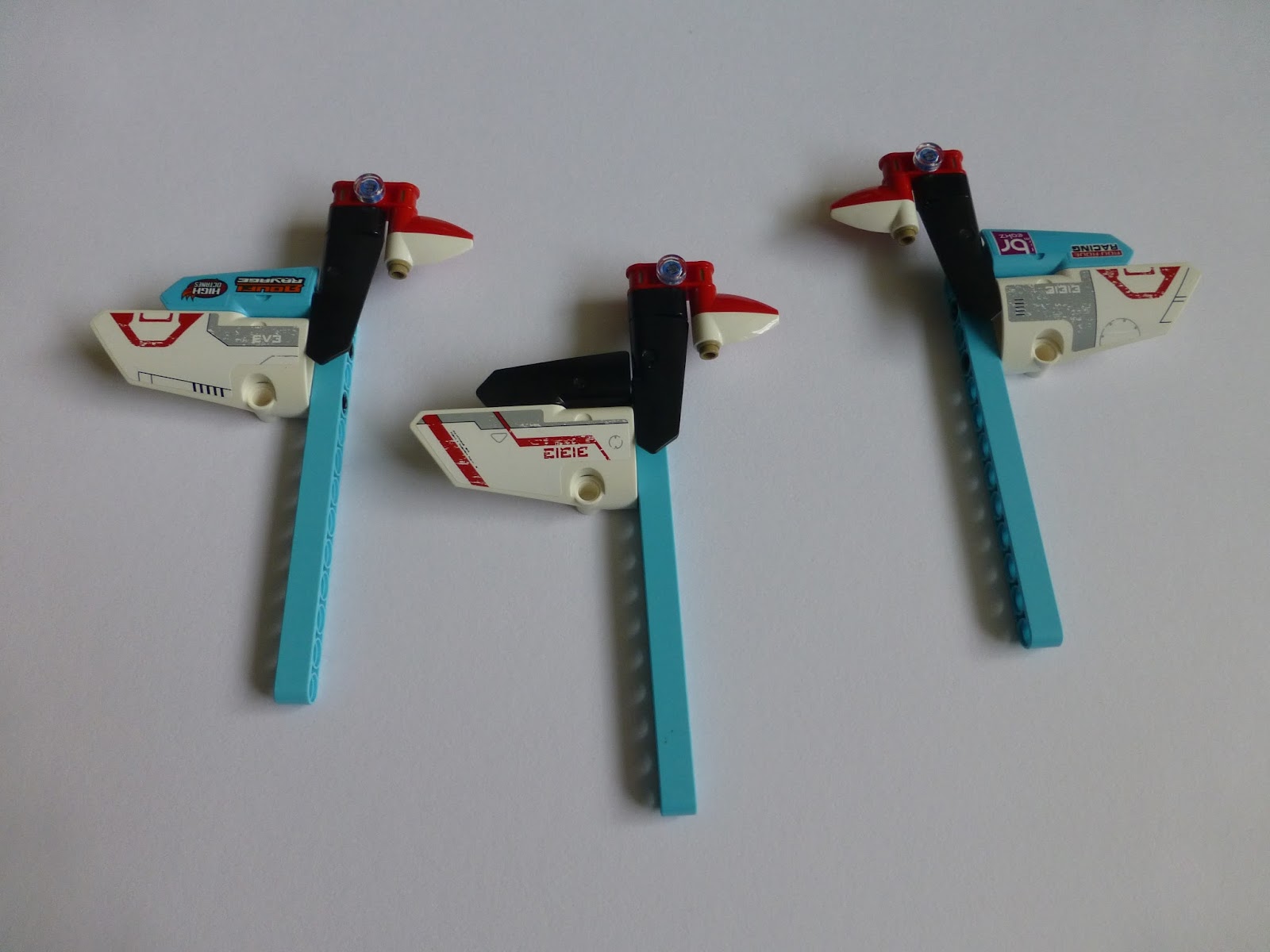 The build started by working out how the ducks would look, and work. They would need to be attached to a “flipper” mechanism, using a wheel as a counter-weight to the duck. These wheels would ultimately be used to detect if a duck was hit. A lot of thought needed to go on working out how to push a duck up, but also allow it to be hit down, and later pushed back down by the game. The Drag Racer comes with a 7M rack beam, which has a 3M range - perfect for selecting one of three positions, ie which duck to flip. 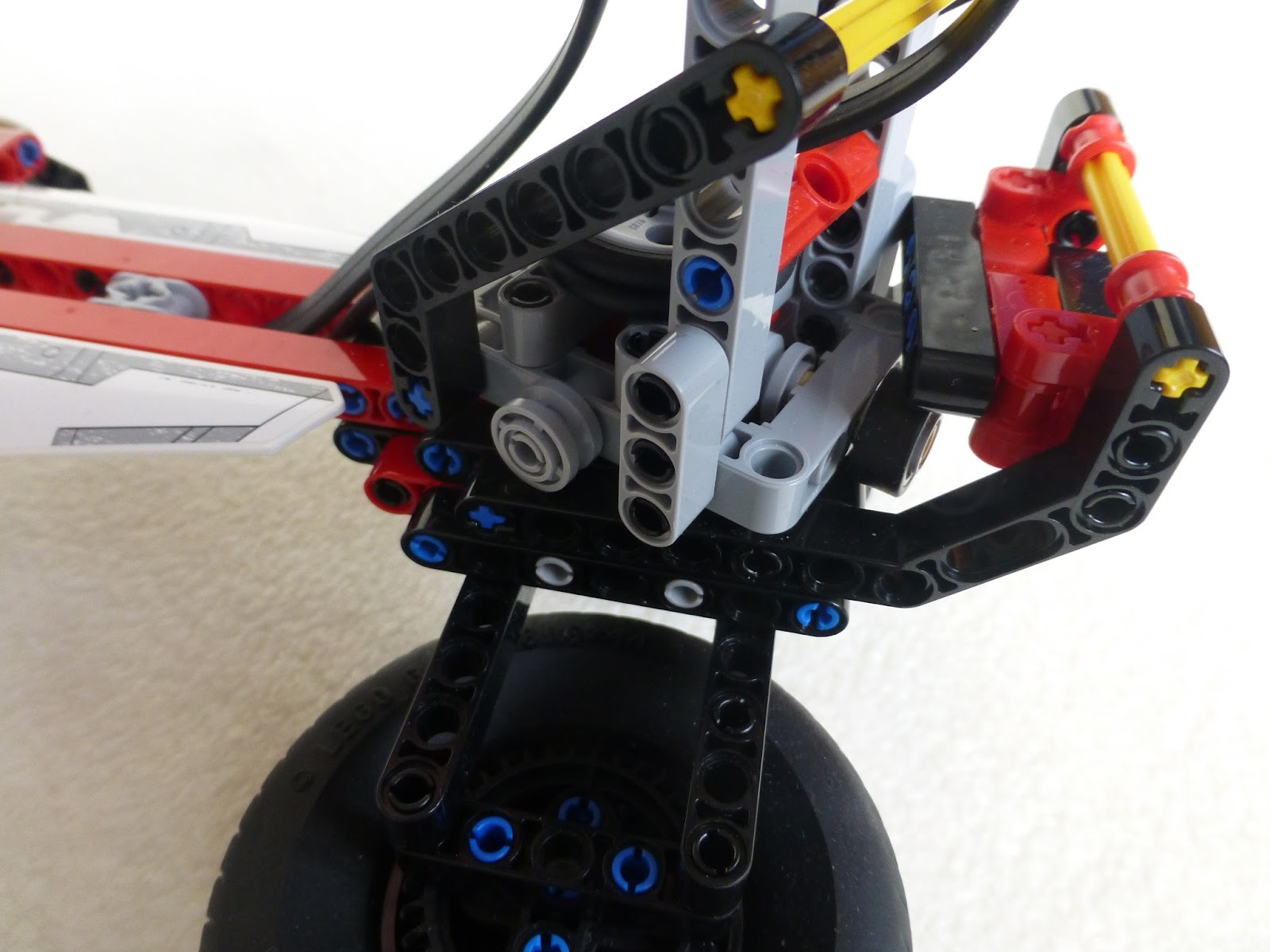 The ball launcher seemed very easy, however the hardest part was mounting it in a secure but turnable manner for the player to use. Neither kit has a turntable, so one was improvised using a 7x5 frame and the tiny wheels - as used on the wheelie bars of the Drag Racer. This worked well, but proved to be rather loose after some game play - the user pushing forward would loosen the axle. The solution to this was to use another of the small wheels with a tyre on the back of the improvised turntable that hooks under a ledge, thus holding everything down and in place.


I wanted the concept of EV3 vs Drag Racer using different colours and parts in each half. Most of the colourful parts are used in the frame all around the ducks. This is an attempt to achieve a carnival appearance, but also has the practical use of catching the balls as they fall. There is a large “catch net” at the back, ball chutes, and in the middle there is a ball “coral” for them to land in. This is very useful for if the player selects a game with more than 3 balls, as they will need to reload during the game. Whilst developing the game I regularly had times where balls were caught inside, so various covers have been made for these nooks and crannies. 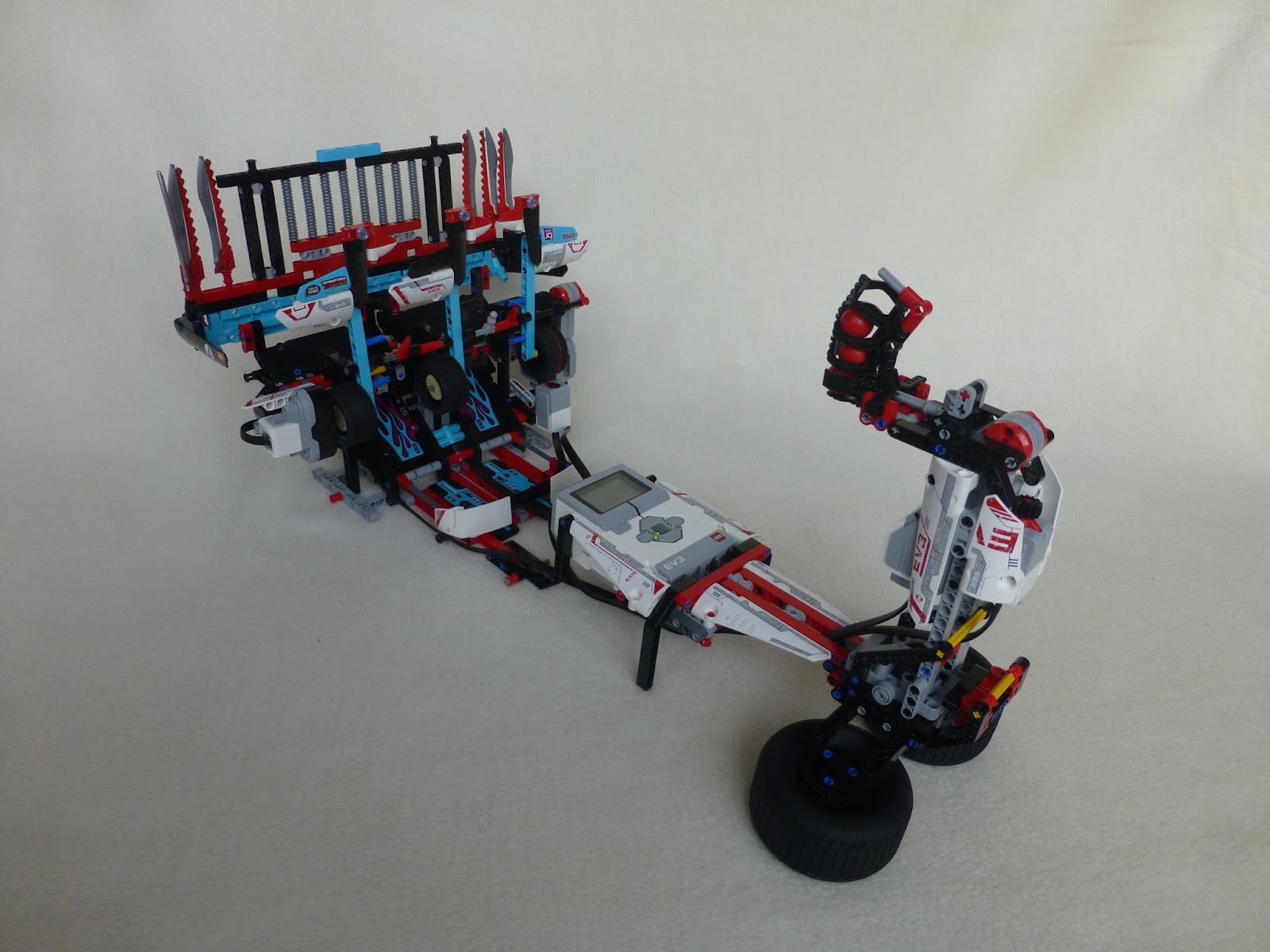 The major challenge in this build has been detecting the state of a duck, either up or down. Originally I had hoped that just the IR proximity sensor would be sufficient. It can easily detect the left and middle ducks’ states, but the right duck is too far away. To solve this the light sensor is used in reflected light mode. This works, but the tyre is remarkable non-reflective to the red light of the sensor. A lightbulb moment, after a discussion with my wife, led to me using the EV3’s red rubber band around the tyre. The extra light reflected results in a good reading. 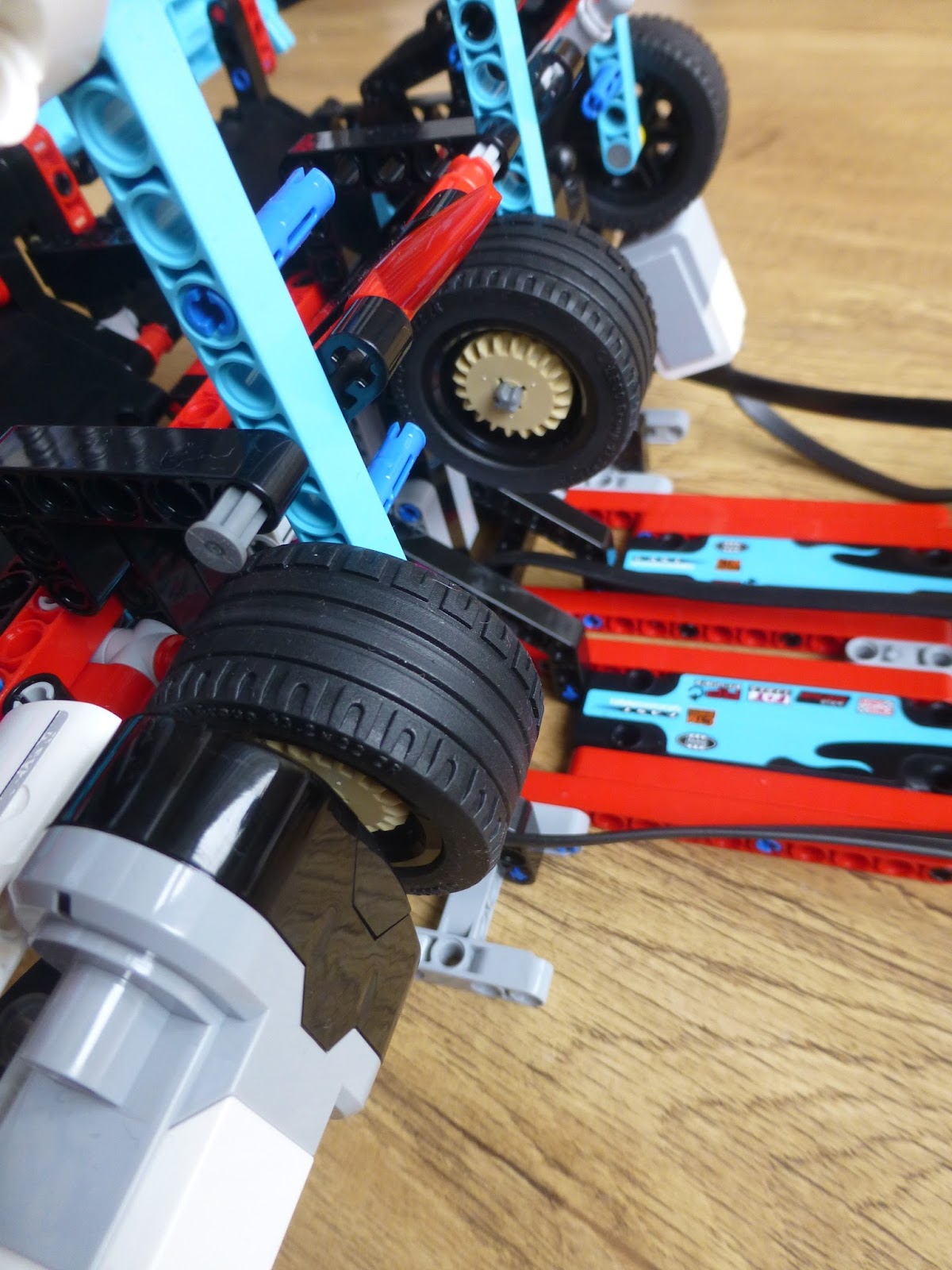 One final design feature I included is related to storing the model. When in use it is rather long, so I wanted to be able to store it more easily. The design is such that the “catch net” can be removed and placed over the resting ducks. Then the ball coral can be released (pulling out two black bush pegs) and folded up under the ducks. This all allows the EV3 and ball launcher to be folded up, with the ball launcher over the ducks. All nice and neat :-) 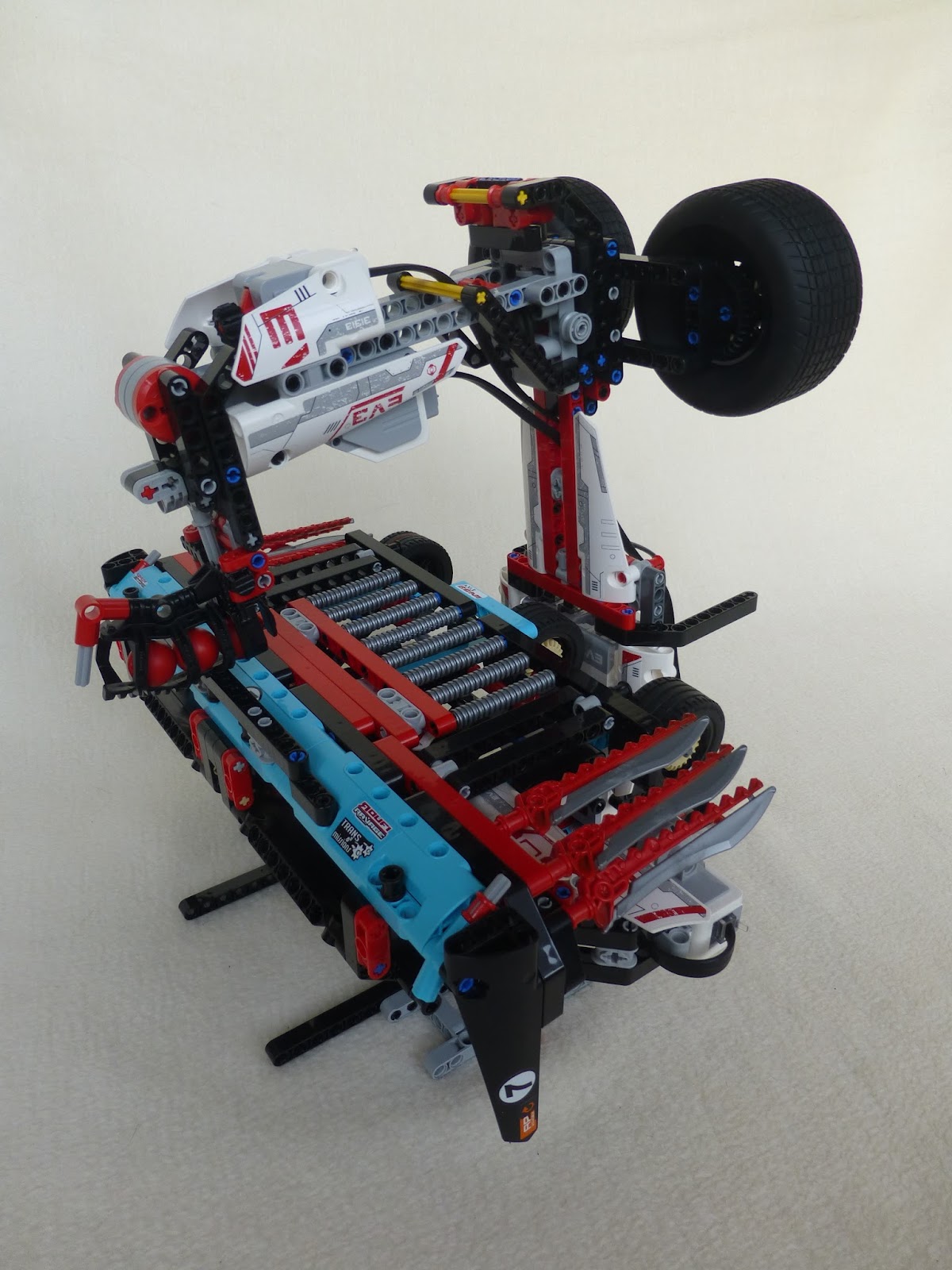 This has been a fun remix to design, build, program and play. I hope you also have fun with it.