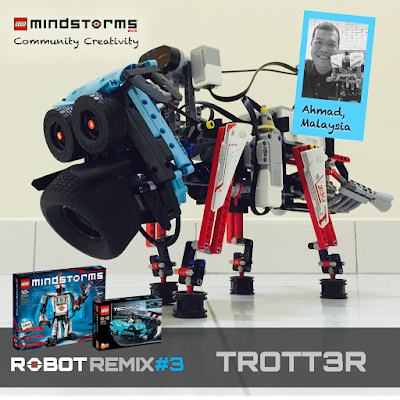 Guest Blogger Ahmad Sahar from Malaysia tells us about the design and challenges he faced while developing the TROTT3R for the MCP Challenge, ROBOT REMIX #3:

How TROTT3R came to be

In March 2016, I was named MCP which stands for the MINDSTORMS Community Partner, like an ambassador for #mindstormsmagic in my country. Up until now I was mainly known for my one kit creations, having only an EV3 set and knowing it limits I was really excited when the ROBOT REMIX 3 competition was announced for all MCPs! We where asked to submit a design combining the LEGO MINDSTORMS EV3 set 31313 with the LEGO Technic Drag Racer set 42050.  I didn’t think I stood a chance and so I had nothing to loose by submitting my crazy proposal! 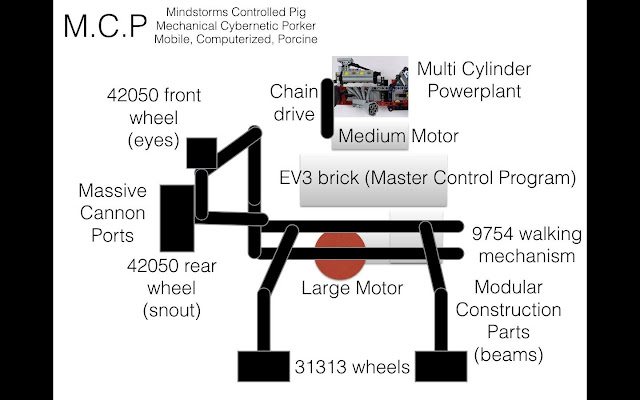 Turns out the LEGO MINDSTORMS Team loved it and this idea was chosen as one of the 4 remix winners but I was told It couldn’t just be call M.C.P. so after a few days of brainstorming, I decided to call it TROTT3R.


The next step was waiting for the parts to come. When it finally arrived, I opened it and spread the contents of the boxes out on the floor of my apartment.

First thought: That’s a lot of parts. Second thought: How am I ever going to do this?  I’ve only ever built MOCs using one Mindstorms set before, and I was very familiar with all the parts that were in it. So familiar, in fact, that I kind of know how far I can go before I ran out of something. The aforementioned AT-AT used up nearly all the beams that came in the Mindstorms set, with only one left over.

But now there were more parts! Also parts that I have never used before! Just look at it! 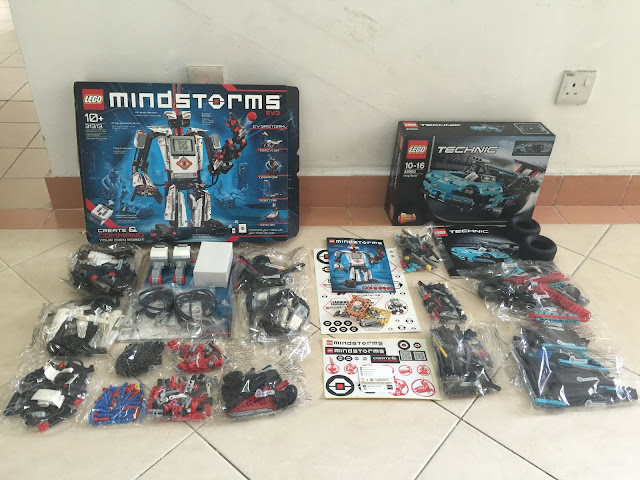 But, there was no going back. So, taking several deep breaths, I got a couple of plastic containers, and poured all the parts in and started to build. 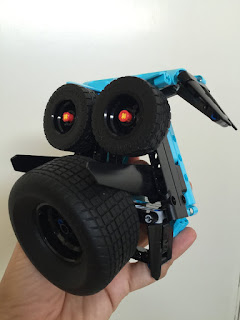 I decided to start with TROTT3R’s head, thinking that this would be the main focal point of the model. There were no preliminary sketches, no plan. I just started by sticking connectors into the big Tumbler wheel and fixed a few beams to hold the eyes and after that I just let my hands and heart do the work. After a while, this appeared. And it looked pretty good!

TROTT3R’s body was next. It was based on my earlier AT-AT build, which was in turn based on the marvellous Dark Side Developer Kit’s AT-AT. But I wanted something that could steer and I knew that the Universal Join that came with the Technic 42050 kit would be indispensable for this. 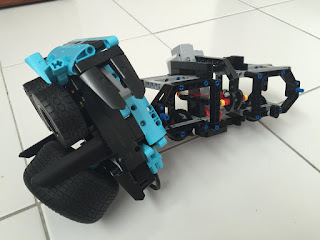 The most difficult part for me was making sure that the connection point was sturdy enough to withstand the stresses of supporting the very heavy EV3 brick. I tried my best to reinforce it, but it was still a bit floppy. I shrugged my shoulders and decided to press on.

Next were the legs. These were copied from the Dark Side Developer Kit’s AT-AT model. Here’s an early walking test. Note that the two halves were connected together at an angle with a grey beam at this point while I tested the walking capability. And it did! Really well! And not only that, it was able to turn as it walked! 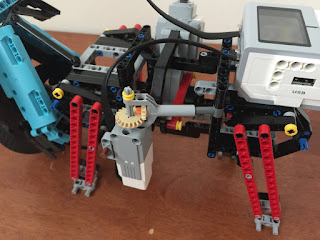 I was pretty happy with how it’s been progressing so far but a big hurdle remained; how to steer it. The steering mechanism would have to be strong enough to hold the two halves at the desired angle as the model walked.

After much experimentation I managed to use the linear actuator and the Medium motor for the task.  It's slow and it has the turning circle of a supertanker, but it worked. 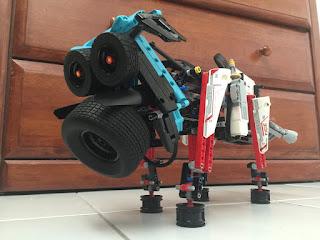 Next I devised better feet using the wheels that came with the EV3 set, and after that I had to figure out where that gorgeous eight cylinder
engine was going to go. I decided to put it at the back of the model and connect the crankshaft to the gears driving the legs so the pistons would move as the model walked.

Finally I tested the whole setup using the Commander App on my phone. And it worked!
It was able to walk and execute three point turns. Even the floppiness of the join between the two halves added to the model’s movement, making it look almost alive as it walked 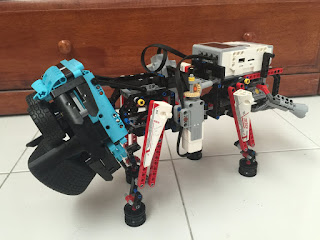 I added some fairings for the legs, and proudly I showed it off in the MCP Facebook group.

I got a boost of confidence from their reactions but also realized from their comments now was a good time to add some sensor to make this creation truly robotic!

Some more tinkering with beams and frames and this happened. 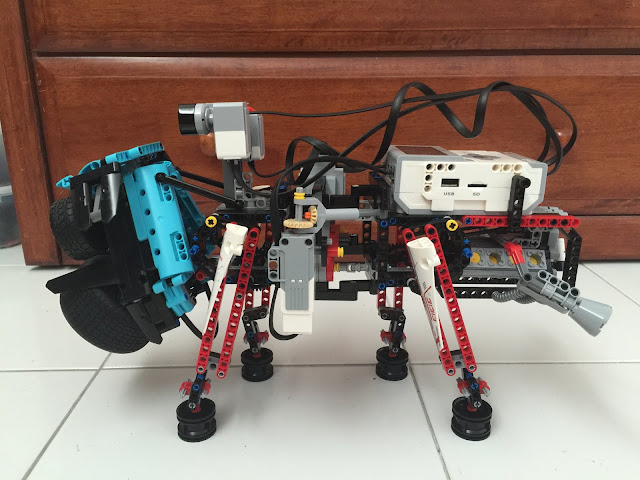 Ok so that is possibly the ugliest way to mount the sensors but it was sturdy, and the IR sensor had a good field of vision. At this point I was frankly a bit nervous about messing with the model any further, so I decided that I was done. Programming the beast was next. I used a very simple program shown below:

The main loop listens to the IR Remote. Depending on the buttons pressed on the IR remote, it activates both the walking and/or steering motors accordingly. For a bit of fun, I even recording grunting sounds and programmed the beacon mode button to trigger them. 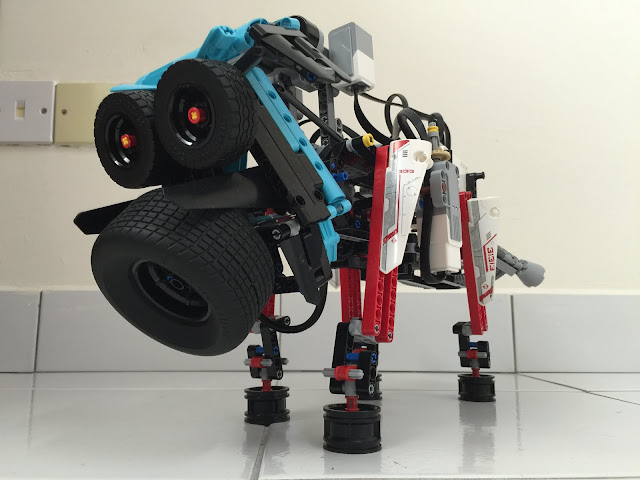 A few test and TROTT3R was done and completed in time. I found the experience has been tremendously rewarding and now decided to learn how to make building instructions!  Soon I will make you some BI’s for this remix but in the meantime, please enjoy these photos BI’s in hope you’ll have as much fun building it as I did.

After this, I plan to build a few more remixes! How about a HORN3D OWL? Or a SPITFIR3?
What about you? what would you make with these 2 sets?