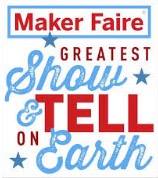 Bay Area Maker Faire, the Greatest Show (and Tell) on Earth is a two-day event held in San Mateo, California. This is this the flagship event for Maker Faire, with close to 200,000 visitors each year. Maker Faire is a venue for makers of all types and ages: students, educators, crafters, tinkerers, scientists, artists, authors, engineers, and more. It is an amazing place for people to share what they have discovered and made. It is also a place where people become inspired. LEGO and MINDSTORMS fit right in!

From May 19-21, 2017, Marc-André Bazergui, Cyrus Cuenca, Sanjay Seshan, and Arvind Seshan represented the MINDSTORMS fan community at Bay Area Maker Faire. Read about their experiences below.