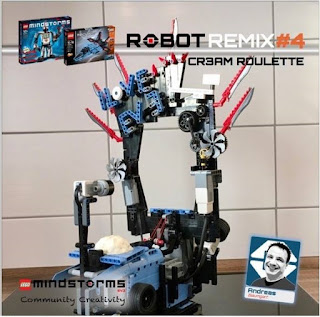 This is the introduction to my RobotRemix#4 Cr3am Roulette, which was created using the LEGO MINDSTORMS 31313 and LEGO Technic Air Race Jet 42066 sets.

Cr3am Roulette is pure fun! And you will wish but one thing while playing this game: "Please, let it not be me!“
I came up with the idea when I saw a video of the a board game called "PieFace“ on YouTube. I thought to myself, "I have to make this with LEGO MINDSTORMS!"

The game’s goal is simple: be part of the small group that does not get whipped cream catapulted into their faces.
How it works: You start the game by cocking the catapult and pressing "enter" on the EV3 Brick. The catapult is now locked. Then, you place a nice large portion of whipped cream on the catapult.


Then, CR generates a random number at which the catapult triggers.
This number corresponds with a certain degree of engine rotation.
The player then pushes the touch button and rolls his/her number of moves (between 1 and 6). Then, the player places his face in the frame and turns the wheels slowly towards himself, using both knobs. 50 degrees corresponds to one turn. The end of each 50 degree rotation is announced with a tone. For example, if the player rolls a 5, he/she has to turn the wheels by 50 degrees 5 times.

Cr3am Roulette counts the turns and compares this with its previously generated random number. When the number is reached, the catapult releases! If not, it’s the next player’s turn. The next player rolls the number of his moves by pushing the touch button, places his/her head in the frame, and turns the wheels according to the moves. This goes on and on until the catapult strikes!

Watch the video below to see how Cream Roulette works.


Cr3am Roulette is relatively easy to assemble. During the design phase, the biggest challenge was designing a construction that was stable and compact at the same time. The parts of the 42066 set are quite suitable for this purpose.
Design Details:
The Catapult: The rotating catapult is attached to the front of Cr3am Roulette and locked with a closing mechanism. The rubber band from the LEGO MINDSTORMS 31313 set provides the tension force. The player manually tensions the catapult. A large EV3 motor locks it in place.

The move counter: The second large EV3 motor records the moves. The tires on the motor axle are rotated by the player. The software evaluates the rotations. The default is 50 degrees for a turn. This value can be adjusted in the program. A mechanical barrier prevents the motor from being turned back.

The frame: At each turn, the player must place his face in a frame so that in the event of triggering, the catapult hits properly. At the same time, the frame is decoration for the game which you can extend or modify it as you like. Adjust it so that the face of the player who looks through it is decorated beautifully!

An infrared sensor is used to ensure that the play's face is in the frame, At the beginning of each turn, the sensor measures whether the player’s face is close enough to the frame; otherwise a tone will sound. No player gets off scot-free.
Use the following links to build you own Cr3am Roulette and have a lot of fun! Files to download: LDD File, EV3-Program
Credits:
Thanks to the MCP Hans-Peter Landrichinger for testing the game with his boys, the valuable feedback, and the video with the boys. Edited by Asha Seshan.