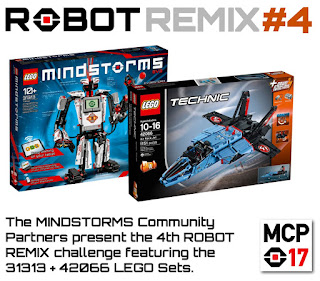 In 2015, LEGO® MINDSTORMS® Community Partners (MCP) were challenged to imagine awesome robots using parts from only a retail MINDSTORMS set and a LEGO Technic. The #ROBOTREMIX concept was born.

The first remix, in 2015 was with the Technic SeaPlane, in 2016 there was one with the TeleHandler and one with the DragRacer. For 2017,  LEGO challenged the MCP to remix with the very big, super cool,  LEGO Technic Jet Plane set!  One challenge different from the other remix was the need to incorporate the Power Function motor found in that large set.

Some amazing ideas were proposed but only 4 could be selected to turn their ideas into actual models. After month of work, we are ready to present you with the 4 Robot Remix of 2017!

Stay tuned for posts on each of these creations, with a story from the creator, how they got their ideas, sketches they made, behind the scene pictures, building instructions or LDD files along with EV3 programs and of course,  the video showing the robot in action!

We look forward to hearing from you, what do you think of these models? do you like the robot remix concept? Which one of these would you build first? Have you ever remixed MINDSTORMS and Technic sets before?