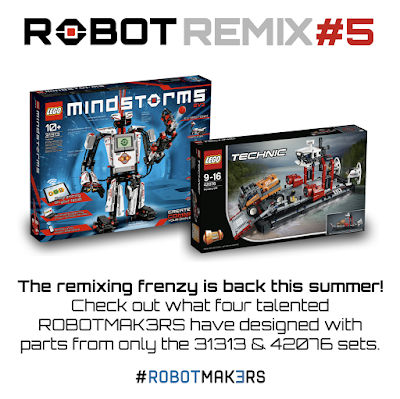 In 2015, LEGO® MINDSTORMS® Community Partners (MCP) were challenged to imagine awesome robots using parts from only a retail MINDSTORMS set and a single LEGO Technic set. The #ROBOTREMIX concept was born.

The first remix in 2015 was with the Technic SeaPlane. The two remix challenges in 2016 featured  the TeleHandler and the DragRacer. In 2017, we saw the very first remix incorporating a Power Function motor in the huge LEGO Technic Jet Plane.

This year features one last robot remix challenge proposed by LEGO and this time it's with the Hovercraft Technic set!

Some amazing ideas were proposed, but only 4 could be selected to turn their ideas into actual models. After months of work, we are ready to present you with the four Robot Remixes of 2018!

Presenting Catfish by Anton, Food Truck by Young-jun, The Plan3 by Ahmad, and Hungry Hippo by Joe.

We will roll out a post for each of these creations when they are ready. We will share a story from the creator, discuss how they got their ideas, preliminary sketches they made, behind-the-scenes  pictures, building instructions or LDD files and, of course, the EV3 programs to go with it.  You can also expect a video showing the robot in action!

Have you ever remixed MINDSTORMS and Technic sets before?  Contact the admin if you would like to have your #robotremix featured on The NXT Step blog.