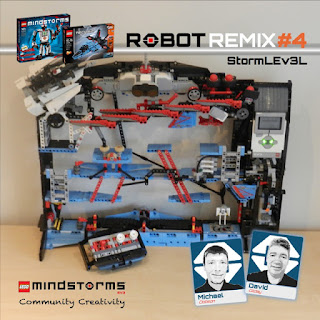 by Mike Dobson and David Gilday

STORM-LEV3L is a fully playable, physical realisation of a classic arcade platform-style game, brought to life through LEGO. This unique idea was inspired by the #robotremix4 challenge to create a design using only the elements from a LEGO MINDSTORMS EV3 set, 31313, and a LEGO TECHNIC Air Race Jet set number 42066. 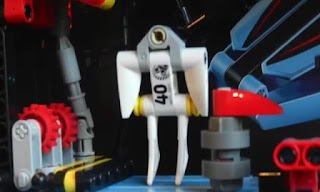 
In the game, astronaut Stev3, is trapped in a cavern on an alien planet after an asteroid storm forced down his spaceship. He was hurled from his craft on impact, and became disorientated and lost.  You get to control Stev3 as he tries to escape the cavern. It is up to you to help him through the physical and mental challenges that must be overcome along the way. You must draw on all your ingenuity to find the way back to the spaceship as quickly as possible to escape from the hostile planet and return safely home. 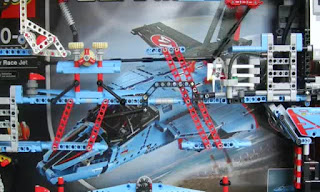 There are a number of interesting features in the final design. The character is connected to a two-dimensional delta-style mechanism driven by two large EV3 servo motors. This can move him anywhere within the game area. Swinging platforms and a gate are driven by the EV3 medium servo motor which is also used to switch the Power Functions motor from the Technic set on and off. This motor, in turn, drives a collection of gears, conveyer belts and turbines which fully integrate with the game play. There are also several passive mechanical elements including a drawbridge and a ball contraption with which the player must interact. The game is played using a traditional-style hand-held joypad built around the EV3 infrared remote control.


Are you ready to face the challenge and excitement? Can you achieve the perfect score of one million points? Build instructions and code can be downloaded here.