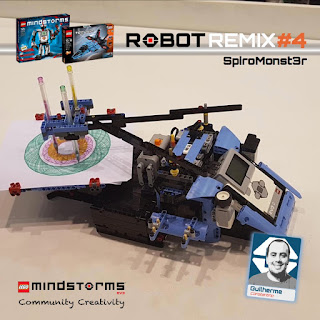 This Robot Remix is a combination of the LEGO MINDSTORMS set 31313  & LEGO Technic 42066 Air Race Jet. For this remix design, Guiherme Constantino designed a spirograph.  A spirograph is a geometric drawing toy that produces curves. A traditional spirograph requires the user to move their pen in a gear wheel. This remix version is powered by LEGO MINDSTORMS.

SPIROMONST3R was displayed at STACK IT in the United Arab Emirates where many people got to see it in person.

I began with just a hand-drawn design of my idea. I was inspired by Jason Alleman's spirograph design that uses a Power Functions motor.  I decided to build a spirograph because it is a fun toy that brings back memories of my own childhood. It reminded me of playing with my grandmother which had a great impact on my life.  I thought a MINDSTORMS version would be something fun to engage children and their parents.

Turning my idea into reality turned out to be much more challenging than I expected. There are lots of existing designs for a spirograph and I wanted to make mine a little different. It took several iterations before I came up with the final design. 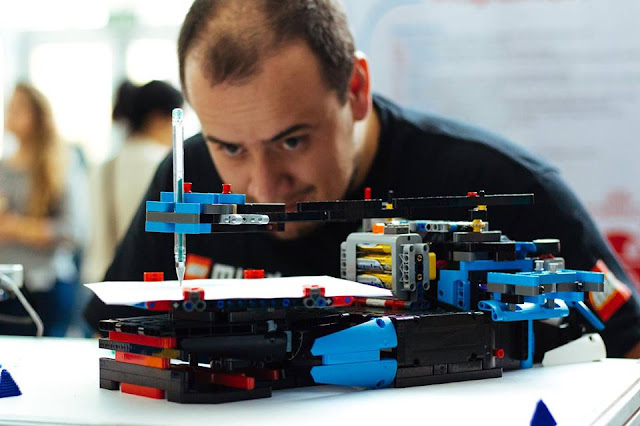 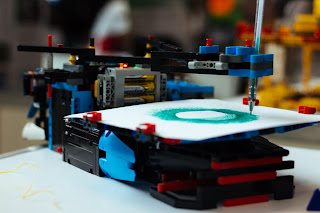 SPIROMONST3RS effectively uses pieces from both sets. The power functions components of in the Air Race Jet is used in a special way. The power functions motor continuously turns the turnable. The medium motor disconnects and reconnects the system when a touch sensor is pressed, using a gear shifter. The large motors move the arm with the pen. To change the pattern that is printed, simply move the liftarm that is connected to the motor.


The user can insert up to three pens at a time to make their colorful design or draw with one pen at a time.

If you want to make one too:

Build instructions and code can be downloaded here.