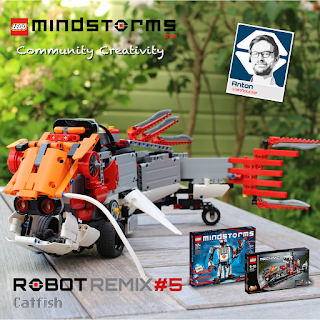 This Robot Remix is a combination of the
LEGO MINDSTORMS Set 31313 & LEGO
Technik 42076. The inspiration for the catfish
comes from the amazing fishes of Professor Ikuo
Yamato 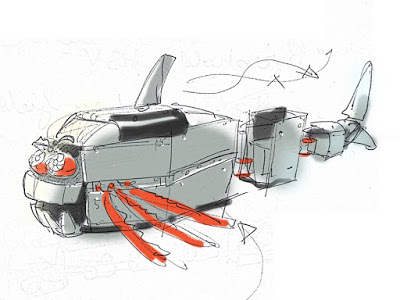 I began with a drawing. Then, I made crude prototypes to test a lot of different mechanisms and
weight distributions quickly. I also invested a lot of time in a propulsion system that was only
powered by the tail. That worked, but the movement was unrealistic. So, I powered the front wheels
in the end. I also wrote 10 different programs until I was happy. I think I took the fish completely
apart about 20 times during the desing process.

I'm especially proud of the movement. Using only 3 motors, I was able to animate one mouth, two fins, forward movement, and 3 tail segments. I strived to come really close to true fish behaviour in terms of size an frequency of movements.

I spent about 30 - 40 hours programming the fish. It's hard to synchronize all movements. It is
therefore hard to transition smoothly from one movement (eg. standing still) to another (eg. a slight
left turn). All possible transitions have been made because of the fact that the button is remote
controllable.

If you want to make one too :
Build instructions an code can be downloaded here
Labels: #MCP #mindstormsmagic #robotmak3r #ROBOTREMIX5 31313 + 42076