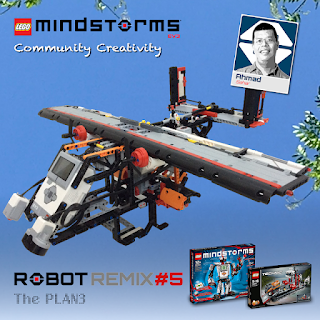 The PLAN3 by Ahmad Sahar

When I saw the announcement, I immediately checked out the Technic set that was going to be used. Set 42076 is a LEGO Technic Hovercraft, carrying a small truck with interesting mechanisms such as a ramp, a crane, and engines.

I used these elements as my inspiration for the design of my aeroplane. The engines and propellers, and the abundance of flat panels could be used to make wings and control surfaces, and made me think that an aeroplane would be a suitable design. In addition, I thought there may be a way to use the linear actuators to make working cargo doors and undercarriage.

Accordingly, I thought of a twin engine transport plane, similar to a Short Skyvan.

In my initial proposal, I thought I could use one motor to power both propellers, one motor to handle undercarriage retraction and one motor to open and close the cargo doors. I thought it would be cool to have the undercarriage retract automatically as the plane was lifted off the ground, and use the touch sensor to open and close the cargo door. And the bulky and angular shape of the Short Skyvan seemed well suited to the large and angular EV3 brick and motors. 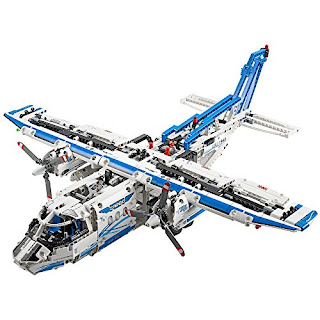 I started searching online for details of both the Short Skyvan and the LEGO Technic 42025 set. Based on the three images I found online, the Short Skyvan has a fixed undercarriage, but I decided to make the undercarriage of my model retractable anyway.  I also downloaded the building instructions for the 42025 set to get an idea how the main functions were implemented. Straightaway, I realised that I would need to implement the undercarriage in a different way, as 42025 used 3 linear actuators for the undercarriage, and only two came in the set. I also studied the control surface mechanism of 42025, which I thought would be cool to implement.

When I received the Robot Remix sets, the first thing I did was to build the Hovercraft to get a feel for the parts in the set. It was a pretty nice build with a reasonable number of functions. I especially liked the drive/steer mechanism which turned the engine mountings as the model was turned and the rotating props. Then I took apart all the parts and prepared for the remix build. 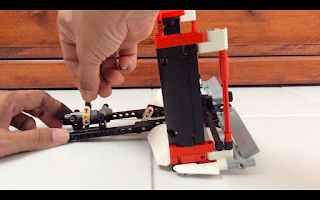 I decided to start by building the tailplane, using the 42025 instructions as a rough guide. Using the rack found in the Hovercraft set, it was possible to make movable rudders, and I was also able to duplicate the functionality of the elevators. Here's a picture of the first sketch model.

Initially I had to use a gear wheel to move the rudders while the elevators worked the same way as 42025.

I already had an idea of using the EV3 brick to form the cockpit of the plane, and have the display show a graphic of the plane's pilots, so the next step was to construct a frame to hold the EV3 brick. I also managed to connect both rudder and elevators to the joystick so the gear wheel was no longer necessary. 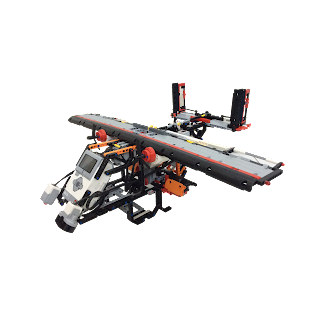 Next I built the wings and ailerons. The wings tended to sag but since I didn't have enough long beams to support them, I had to live with that. Aileron mechanism was similar to that used in another LEGO Technic set, no 42041.

Using the parts in the set, I incorporated two friction clutches so the position of the rudders and ailerons could be adjusted as needed.

Then, I attached an EV3 large motor to the top of the fuselage adjacent to the wings and used axles and gears to transmit the rotation to the two engines, each engine being driven from one side of the large motor. The propellers were are little small, but I thought it was good enough.

The PLAN3 features an undercarriage that can support the plane's weight.  It features a rear cargo door similar to the one in Technic 42025. There is a display stand so that you can easily operate all the features of the model.

Several sensors offer additional interactive functionalities. An IR sensor and the touch sensors are on the model's nose, and a color sensor is located just behind the wings. Since the model is now on a display stand, I scrapped my original idea of making the undercarriage retract when the model was lifted off the ground and programmed it to retract if you wave your hand in front of the touch sensor. The engines are programmed to start when to pressed the touch sensor, and the cargo door to open and closed when you touch the color sensor.

Watch the video below to see how PLAN3 works.

Ready to build one too? You can download the building instructions here. The code can be downloaded here.

This project is dedicated to Vassilis Chryssanthakopoulos, who sadly passed away in February 2018. He is featured as one of the two pilots on the EV3's screen.

Thank you to Asha Seshan for the help editing and creating this article.