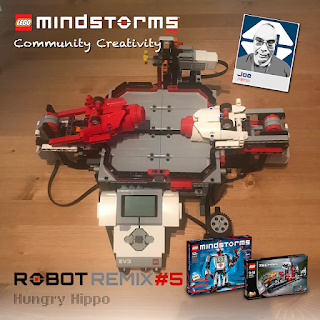 Are you hungry for a brand new game?

Hungry Hippo is a cross between LEGO MINDSTORMS 31313 and LEGO Technic 42076.  The two sets are combined to recreate an electronic version of the very popular children's game called "Hungry Hungry Hippos." The goal of the game is to see which player "eats" the most balls.

In this MINDSTORMS version, a single player plays against the EV3. 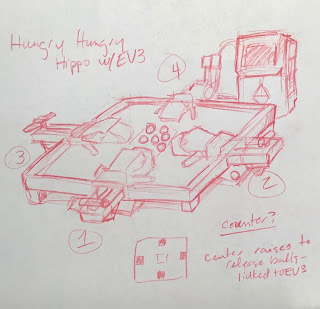 Joe came up with the idea while looking at a McDonald's Happy Meal version of a Hungry Hungry Hippos toy his niece was playing with. He also wanted his remix idea to be interactive game with a a user.  Looking at the parts in the two sets, he was knew he could create "hippos" in different colors and the use the flat panels for the bottom of the game board.

Joe started with a sketch of his design. He did have to alter the design from a 4-player to a 2-player game (one user and one computer player). He also moved the ball lift to the edge. As a result, the EV3 moved to the front and the touch sensor was used as a controller. 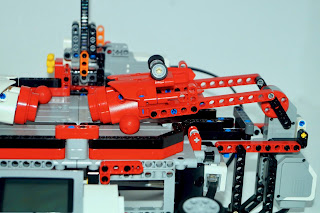 There are two players - the EV3 and the user. Each controls a "hippo". The EV3 continually runs the white hippo.  The red "hippo" player hits the touch sensor to make the mouth move.  By having a rail beam where the head rests, the motor mechanically raises and lowers the head with each revolution. A ball lift is run by a medium motor that is activated by the score sensors (infrared and color).

At the beginning of the game, the score to win is set by using the EV3 buttons to go higher or lower than the default number of 5. After that, the balls are lifted and released on to the game board.

The biggest challenge in this design was the dimpled balls in the 31313 set. Building the lift took some trial and error, but Joe was able to make a single ball feed. However, the red balls in the MINDSTOMRS set are not truly round - there is a dimple that is large enough to stop the ball's motion. The result was that the balls would get trapped under the game board from time to time. This was fixed by manually pushing the ball to the ball feed. 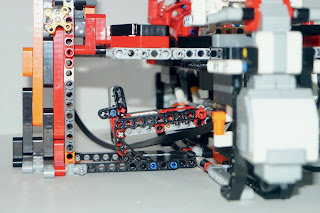 If you want to build one too, building instructions and code are available for download.
Labels: #mindstormsmagic #robotmak3r #ROBOTREMIX #ROBOTREMIX5 31313 Joe Meno