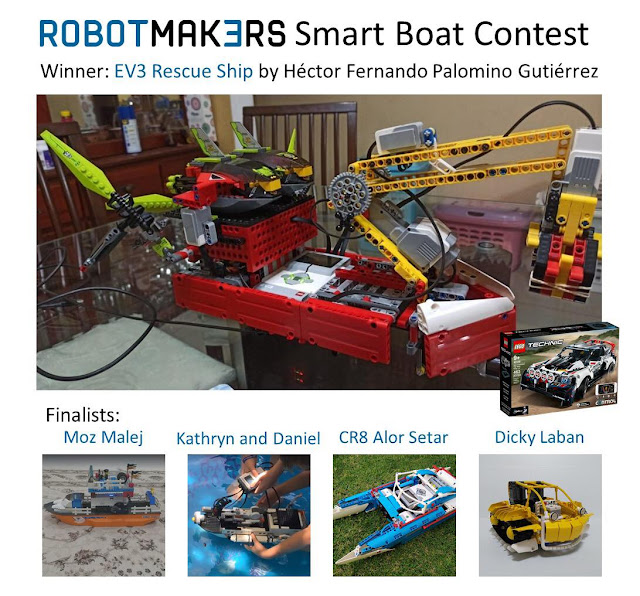 The ROBOTMAK3RS sponsored a community Smart Boat Contest. Participants were challenged with the task of creating a smart boat that includes MINDSTORMS, BOOST, Powered UP, CONTROL+, WeDO or SPIKE Prime. The boat did not have to float on water. The winner of the contest was Hector Fernando Palomino Gutierrez from Lima, Peru.

Hector has been building with LEGO robots since 2012. He took a course called "Introduction to Mechatronics Engineering" at his university. One of the tasks in the course was to build a robot with an NXT core set to complete a challenge. That experience made him fall in love with LEGO MINDSTORMS. In 2015, he got a job as a high school teacher in educational robotics and now he continues working with MINDSTORMS.

To come up with this design, Hector started by looking for inspiration on Google and YouTube. When none of the models were to his liking, he started thinking about the WRO robots his students have made. He remembered that every robot has some type of clamping or collection mechanism.  He found a robotic arm design on LEGO Education's website. He felt the arm would be perfect for his ship as it would resemble a real-life rescue ship with a crane. He had to make several modifications to the design, but that robotic arm was the source of his inspiration.

The most challenging aspect of the construction was meeting the deadline since he only discovered the contest two weeks prior. He works until 8PM each night. Therefore he had only 8PM till 2AM every day to build the ship. He was exhausted by the end of the contest, but found it worthwhile.

Another challenging aspect was incorporating the ultrasonic sensor into the design. He had almost completed the build when he realized that he had forgotten to add the sensor to the ship. It was a unique challenge of find space and also ensuring that the ship stayed balanced. It took another two nights of work to finish this aspect.


We also want to recognize the following finalists for their outstanding creations:

Moz Malej created a unique smart boat using LEGO Boost and LEGO City bricks. His idea was to create a stable platform for the Captain of the boat so that even when waves hit, the platform at the top of the boat remains horizontal, allowing the Captain to pilot his ship safely. Link 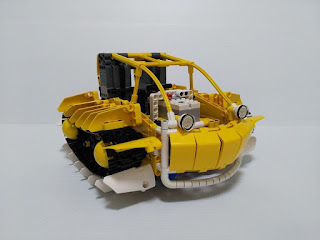 Katherine and Daniel worked together to create an elaborate scene involving a floating coastguard ship powered by an NXT and an island full of pirates. They programmed their smart boat to automatically aim and attack color-coded targets to rescue a stranded Pizza Man. Link

CR8 Alor Setar designed an EV3-based colorful catamaran. He used elements from 42077, 45444 and a few additional Technic panels. Although not tested on water, this design is sure to catch the eye. Link

Dicky Laban created an all-terrain crawler that can even float with Powered UP. His clever design of paddles allows the smart boat to navigate through the water. Link


For your inspiration, we would also like to highlight a few projects created by the ROBOTMAK3RS themselves. 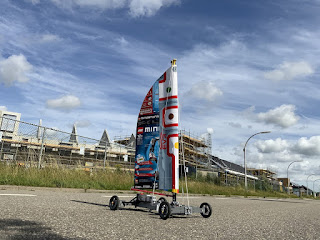 Anton Vanhoucke used an EV3 and wind to power his land yacht. The sail was constructed from the the play mat included in the 31313 set. His clever construction is sure to provide hours of entertainment on a windy day.

We hope these ideas inspire you. You can learn more about the ROBOTMAK3RS here.