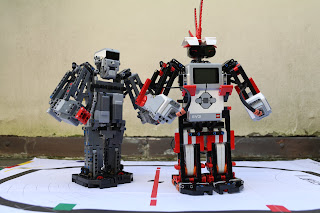 Edward Young is a 19-year old mathematics student in the Czech Republic. He has been building with MINDSTORMS and Technic ever since he received the NXT 2.0 set in 2009. He has been creating machines of various types since then. LEGO MINDSTORMS played a part in developing his interest in math and science.
Recently, Edward won the grand prize in the ROBOTMAK3RS Community Challenge for his RoBoxers design. Participants were asked to design a game using any LEGO robotics platform of their choice. Edward designed a boxing game made up of two robots.

What inspired you to create this project?

Three years ago there was a “battle bot” competition held by another AFOL website. I entered a video of a spinning robot with some ridiculous durability tests. I didn’t have any success then, but I really liked the idea of two LEGO robots competing with their strength and durability. So this idea stayed with me, though I never got around to it. Then I saw the ROBOTMAK3RS Game Contest and it was obvious what I had to do. I decided against a fight to the death, because I’ve come to care for my bricks since that earlier video and the game would have to be reusable, too. I tried to make robots that would fall apart on purpose when hit in a certain spot, but they were unstable and the game didn’t work very well. So I arrived at the final design — an artificial fighter that can’t be beaten, but can be hit in a few tender areas and a weaker, but resilient opponent controlled by a human.

How long did it take you to design and build your robot?

It took just under a week to complete the first viable prototypes and their programming. I came back to the models a few times over the course of another week, tweaking and perfecting the design.

How does the model work?

ROCK3Y’s legs are a reinforced version of the ones on the Alpha Rex model from my beloved Mindstorms NXT 2.0 set. They use one touch sensor each to keep track of the position of the legs. There is a third touch sensor attached to the back of the robot. Two targets on the robot’s chest are connected by a liftarm that presses the touch sensor when either of the targets is hit. These targets are worth 50 points. The EV3 brick buttons also serve as targets, they are much harder to press down and are therefore worth 100 points. The EV3 brick counts this score and keeps a file with the high score.

The large EV3 motors that power the arms double as the robot’s fists. Their weight makes for some very hard punches. The arms are attached at such an angle that, when ROCK3Y throws a punch, the extended arm shields the chest targets, making it extra hard to score.

Finally, we arrive at the head. The design is an homage to EV3RSTORM from the MINDSTORMS EV3 retail set. ROCK3Y uses the beacon tracking function of the IR sensor to search for his opponent. The program simply works to keep the opponents facing each other and makes ROCK3Y approach when he is facing the opponent. Once he gets within arm’s reach he braces his legs in a stable position and then chooses randomly between a left hook, a right hook and a shove (both arms punch at the same time). This decision is repeated every 0.5 seconds. The IR sensor also allows another human to control ROCK3Y in Person vs Person play.

Hubby’s legs are a reinforced version of my earlier work (a walking LEGO robot pictured below). One Technic L motor moves both legs to make the robot walk forward. An axle is fed through each leg and powers a pair of wheels in the feet which spin in opposite directions and make the robot turn. It’s almost like how humans turn when walking by twisting their ankle.

The XL motors that power the arms again double as the robot’s fists. Hubby’s punches are much faster than ROCK3Y’s, but he can’t push with as much strength.

The Technic HUB is attached to Hubby’s back. It’s protected by a pair of axles that protrude from the back. These axles are attached in such a way that you have to overcome a lot of friction to push them in, which breaks the impact when the robot falls on its back. The hub’s internal gyro detects falls and Hubby’s programming then stops responding for five seconds as penalty.

Hubby’s head is built around the EV3 IR beacon, which allows ROCK3Y to see him.

Here is a high-level look at the code for each of the robots: 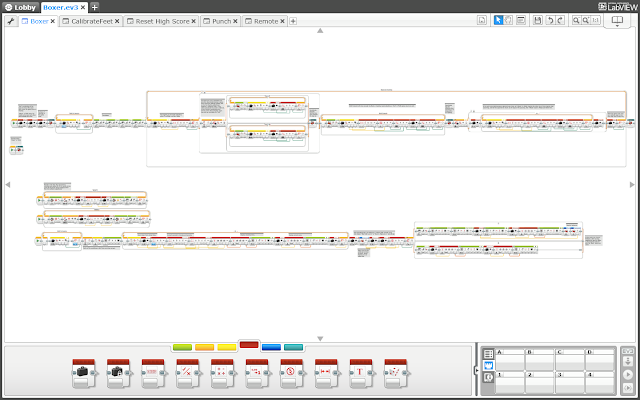 What was something you found most challenging about this design?

I don’t own an EV3 gyro sensor so ROCK3Y could never be able to detect his falls. I decided that, therefore, he could never even be allowed to fall over. The most challenging part of the design was to make ROCK3Y’s legs and their programming strong enough to achieve this.

The legs used on Hubby were much more work, I spent a month or two making them work well. But that was for an earlier robot of mine so I had them in my repertoire, so to speak.

What is your one piece of advice to a young robot maker about creating such robots?

The best thing about LEGO is there is no wasting material — you can rebuild as many times as you wish. My advice for building LEGO robots is prototyping. Put together a simple version of what you want to achieve, test it, learn from it and improve upon it. And don’t give up when the prototype is “good enough” — finish when you are happy with the result.

Have you made anything else?

My favourites are a Lamp that tracks what you do on your desk because the programming uses some nice maths, a Santa Claus that delivers presents in his sleigh because it came together so well with so many moving functions and a Transforming Monster Truck. I am currently working on a mechanical calculator that will perform addition, subtraction, multiplication and division!