MINDSTORMS Robot Inventor is Now Even Better than Ever 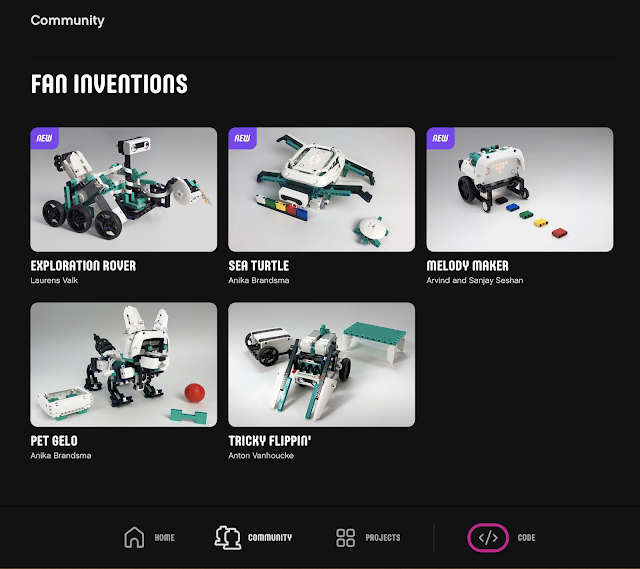 Great news for MINDSTORMS fans: the newest member of the LEGO MINDSTORMS family, Robot Inventor, received a significant upgrade this month. New features bring to life even more possibilities for creativity and inspiration. We sat down with Morten Svendsen and Dan Meehan, two LEGO MINDSTORMS Designers, to discuss the Robot Inventor set and chat about future plans during a recent MINDSTORMS Roundtable discussion.

The two main features added this month are the inclusion of a Community section as well as compatibility with all Powered Up motors and sensors.

In late 2020, we saw a quick preview of the addition of new content with the inclusion of two add-on models by community builders, Anton Vanhoucke and Anika Brandsma, from the Netherlands. Anton transformed Tricky to create a sumo-style flipping robot. Anika embellished Gelo to transform it into a pet you can interact with. These two models are great examples of how children can take the original designs in the MINDSTORMS App and enhance them by adding more LEGO brick and creating programs of their own. According to LEGO, the fan model additions from the community increase the scope and breadth of what you can do with the product.During the Roundtable, LEGO announced that in 2021, they will bring a larger collection of curated fan models to life within the MINDSTORMS App. The most recent release includes completely new models by Sanjay and Arvind Seshan, Anika Brandsma, and Laurens Valk. Sanjay and Arvind, from the United States, have created a quick-build Melody Maker for young children to explore sound and use the color sensor in the set. The robot drives over the colored bricks and plays a tune.

Anika, who is well-known in the community for creating animals with LEGO MINDSTORMS, has built a brand new Sea Turtle model using Robot Inventor. The Sea Turtle moves, avoids obstacles and even reacts to colors. Finally, Laurens, a life-long space enthusiast from the Netherlands, has created his own version of an Exploration Rover. The build instructions and code can be accessed through the MINDSTORMS Robot Inventor App.
According to Dan and Morten from LEGO, the initial set of models are being created by a small group of designers known as "Day 1 Creators".  These designers, selected by LEGO, worked with company designers for a year or more to propose, develop, and finalize their robots. Additional models by selected fan community members are expected to be added into this Community section over time. These new models will continue to be moderated and have LEGO involvement to ensure diversity, consistency, and product safety.

The new update also brings with it a significant expansion of programming blocks. Now, there is full compatibility for all Powered Up motors and sensors which use the same cables as the Robot Inventor set. Users can add a new pallet of blocks by clicking on Extensions icon in the App and adding the brand new LEGO Powered Up Extension pallet. Also explore the More Sensors Extensions. You can now get raw color sensor readings as well as a new Force Sensor block.According to Dan Meehan, with this additional capability, MINDSTORMS truly becomes a "robot inventor set". For example, now that MINDSTORMS users can connect their Boost and WeDO motors and sensors and use the dedicated blocks to bring their designs to life, we can expect to see an increase in creativity and multi-platform models. As Dan mentioned, LEGO understands that they are providing a "toolkit" to the community and are excited to see what the fans create with it.

Dan and Morten gave much credit to the community who were involved from the early days of product development via workshops held in Billund, Denmark. LEGO recognizes the role of fans and older builders and are very aware of the needs of the community as well as feedback they provide. MINDSTORMS builders will be excited to learn that LEGO is currently working on adding Hub-to-Hub communication. This is perhaps the most requested feature from the community since the launch of Robot Inventor in late 2020. We are looking forward to seeing this feature added as we know that multi-hub models means new and inspired ideas. LEGO also announced that they are planning to enhance the Python experienced within the MINDSTORMS App in the future.