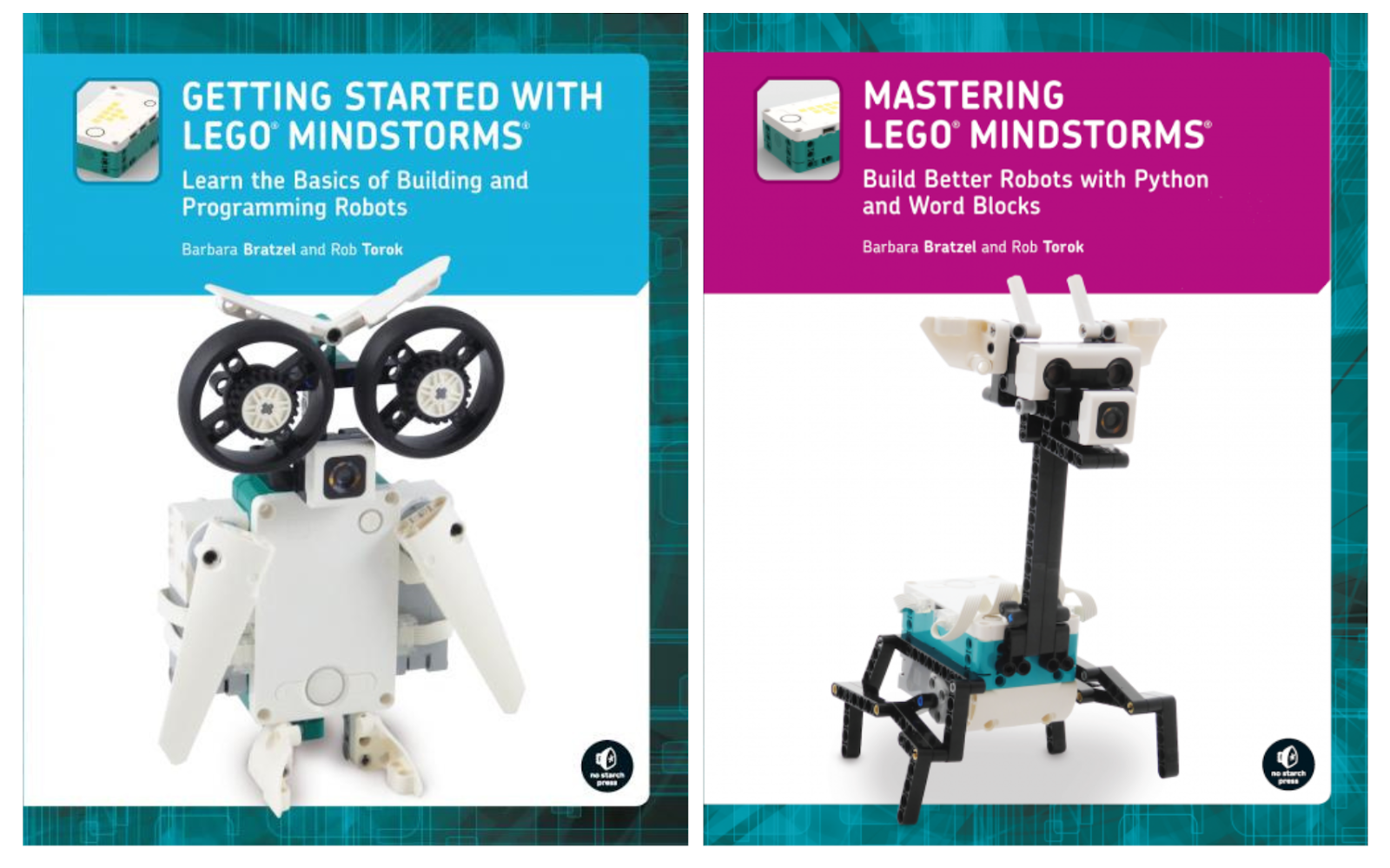 This Fall, two new books about MINDSTORMS Robot Inventor by Barbara Bratzel and Rob Torok will be published by No Starch Press. Getting Started with LEGO MINDSTORMS and Mastering LEGO MINDSTORMS are currently available for pre-order. ROBOTMAK3RS reached out to the authors to ask them about their work.

Barbara Bratzel is a teacher at Shady Hill School, a PreK-8th grade independent school in Cambridge, Massachusetts. She was first introduced to LEGO robotics by Professor Chris Rogers at the Center for Engineering Education and Outreach at Tufts University. For the past 25 years, she has used LEGO robotics in the classroom to teach science, math, engineering, and programming. Currently, she runs a makerspace and teaches science and coding at the Shady Hill School.

Rob Torok is a secondary school teacher in Tasmania, Australia. He was introduced to LEGO MINDSTORMS more than 20 years ago when he purchased the original LEGO MINDSTORMS set (9719 Robotics Invention System). He has mentored teams in RoboCup Junior, FIRST LEGO League, and the FIRST Robotics Competition. In 2015, he founded a community-led robotics group, called Devil Robotics that runs after school programs for children aged 10-18 and hosts a regional FIRST LEGO League tournament. Currently, Rob teaches Computer Science, Mathematics and Engineering Design at his school.

What is your motivation for writing these books and who is the intended audience?

Both of us are K-12 STEM teachers. As teachers, we’re constantly inspired by our students—their ingenuity, their inventiveness, and their ability to take what they’ve learned and soar! With basic coding and building skills, they can move way beyond relying on building instructions and canned programs. We wrote these books to help our readers design and build original LEGO creations, too, by providing that foundational knowledge to get them stared. We envision the books being of interest to a wide variety of readers, from children with brand-new robotics sets, to experienced LEGO builders wanting to expand their coding skills, to teachers and parents helping others learn robotics and programming. 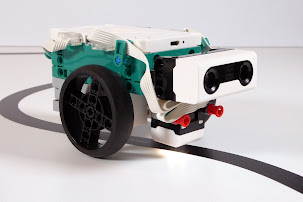 Why did you choose to write a book with Robot Inventor and not SPIKE Prime?

Our initial idea was to write a SPIKE Prime book. The publisher convinced us to focus on Robot Inventor instead because it is a more widely used platform. However, we wanted to make sure that the books were useful for SPIKE Prime users as well. In fact, we have special boxes in the books to explain features that are unique to SPIKE Prime such as the force sensor.

Why did you decide to write two books at the same time?

Actually, we didn’t. We initially wrote one comprehensive book, which ended up being so big that the publisher split it in two. That said, we think the two volumes work well, one for beginners who need the basics without too much extra detail, and one for experienced users who are eager to tackle more advanced programming and building.

There are many ways of learning coding, python, etc. What do you think the benefits are of using LEGO MINDSTORMS?

Programming robots is a great way to learn to code. First, programming lights, motors, sounds, and sensors is generally more compelling for beginning coders than writing a program to print “Hello World.” Second, programming the robot provides immediate physical feedback about the program—you expected your robot to stop at the black line and it didn’t—in a way that encourages the programmer to re-examine the code and troubleshoot. 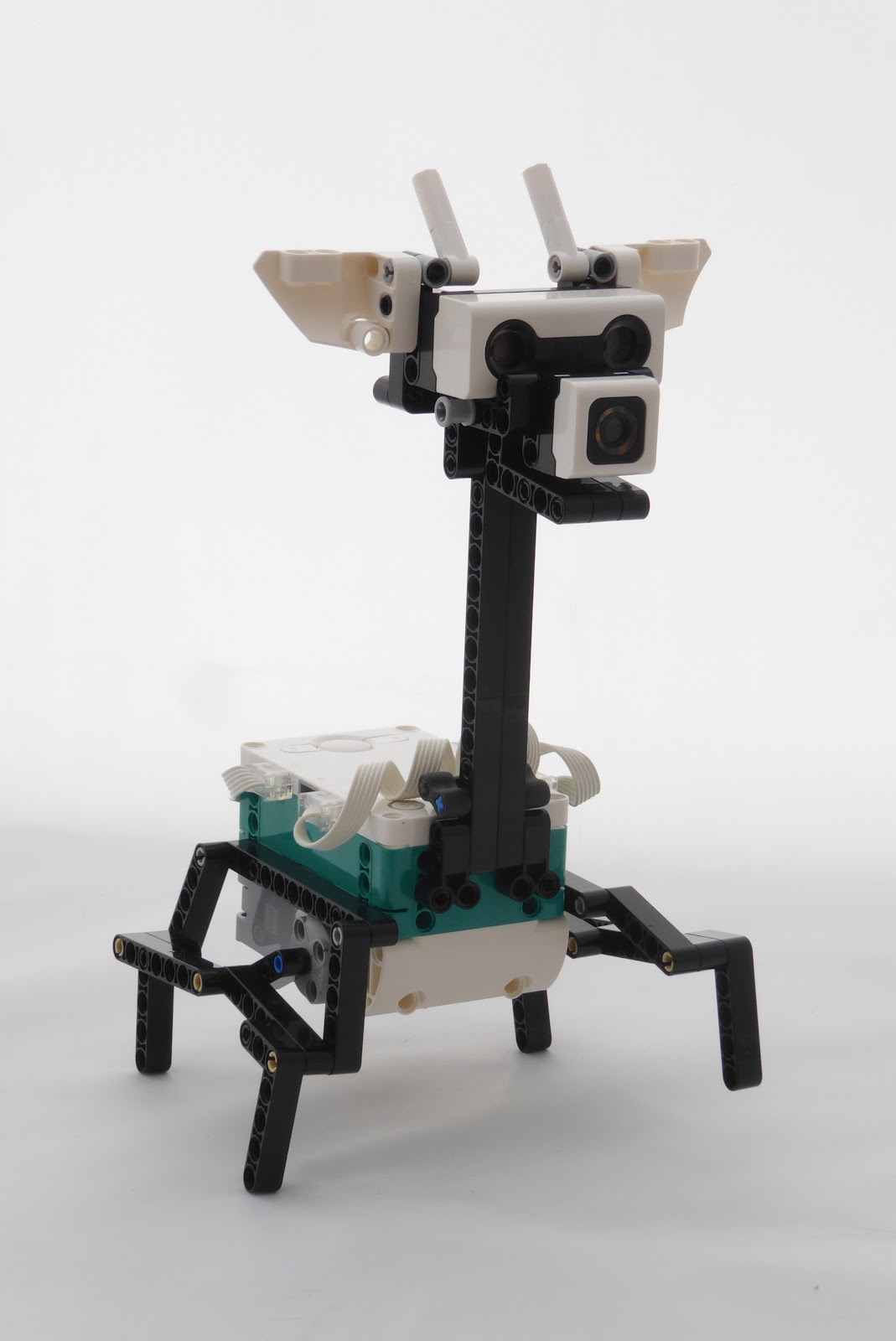 The models in your books are generally simple/quick builds. Can you tell us what the motivation is behind this?

There are so many step-by-step building instructions for beautiful and complex models available. Those models are wonderful, but they can also be intimidating. Users think, “I could never design something like that myself.” We want to help budding designers get started, both with simple models they could build in a few minutes, like the simple cars at the beginning of the first book, and with building principles they could apply to create their own effective and sturdy designs.

What is your favorite project in each of your books and why?

[Barbara] This is a little like asking a parent to pick a favorite child. There are so many projects that I like. In general, my favorites are the most open-ended ones that encourage creative solutions. For example, the last two fairy tales in the first book, Little Red Riding Hood and The Three Little Pigs, invite the reader to choose which client to help and to then engineer a device to aid them, either one based on the suggested solutions or one from their own imagination.  Similarly, the three art projects in the second book’s Ultimate Challenges chapter let the reader use the skills they learned in the book to express themselves in new and creative ways.

[Rob] The first chapter of Getting Started has a project called “Moving Without Wheels”. I’ve been using variations of this challenge with students and teachers for years. I love how much fun you can have with such a simple idea and, and in this book, it’s a great demonstration of what you can do without writing any code. In Mastering LEGO MINDSTORMS, there’s a chapter that shows you how to make games that you can play on the Hub, including a Cookie Clicker-type game, a reaction timer, and a memory game. I love making robotic games for people to play and hope that this chapter inspires and supports the reader to make their own amazing creations. 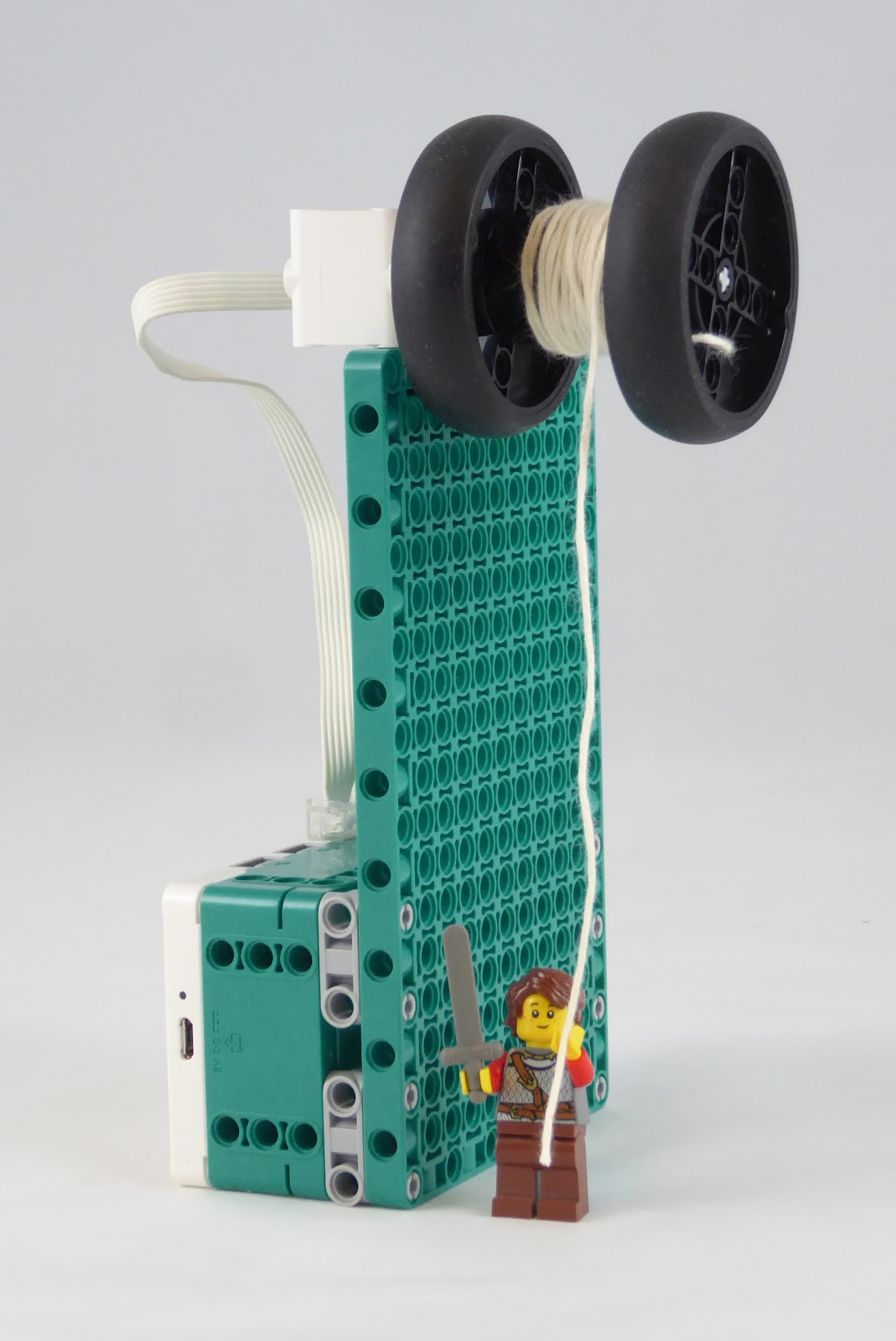 What was your inspiration for the fairy tale chapter in the Getting Started book?

[Barbara] In my classes, I have been basing projects on fairy tales and fables for many years. I find they are engaging for all different ages of students (and teachers, when I run workshops for educators). These stories are usually familiar to students; presenting them as engineering challenges makes the students look at them in a new way. They go from passive consumers of the stories to active participants in them. Their inventions can change the course of the story! Plus, the students build empathy by putting themselves in the characters’ shoes.

The Mastering LEGO MINDSTORMS book jumps to “building better robots” and python. How do you see readers using this book compared to the Getting Started book?

Mastering LEGO MINDSTORMS goes beyond the entry-level programming and building techniques introduced in Getting Started. It will help readers to create better robots by showing them ways to combine what they’ve previously learned into more sophisticated and complex robots. Examples are provided in Word Blocks and Python. This book is not only for anyone who has enjoyed Getting Started and wants to continue their journey, but also for anyone who is already familiar with basic Word Blocks programming and is ready for some new challenges. 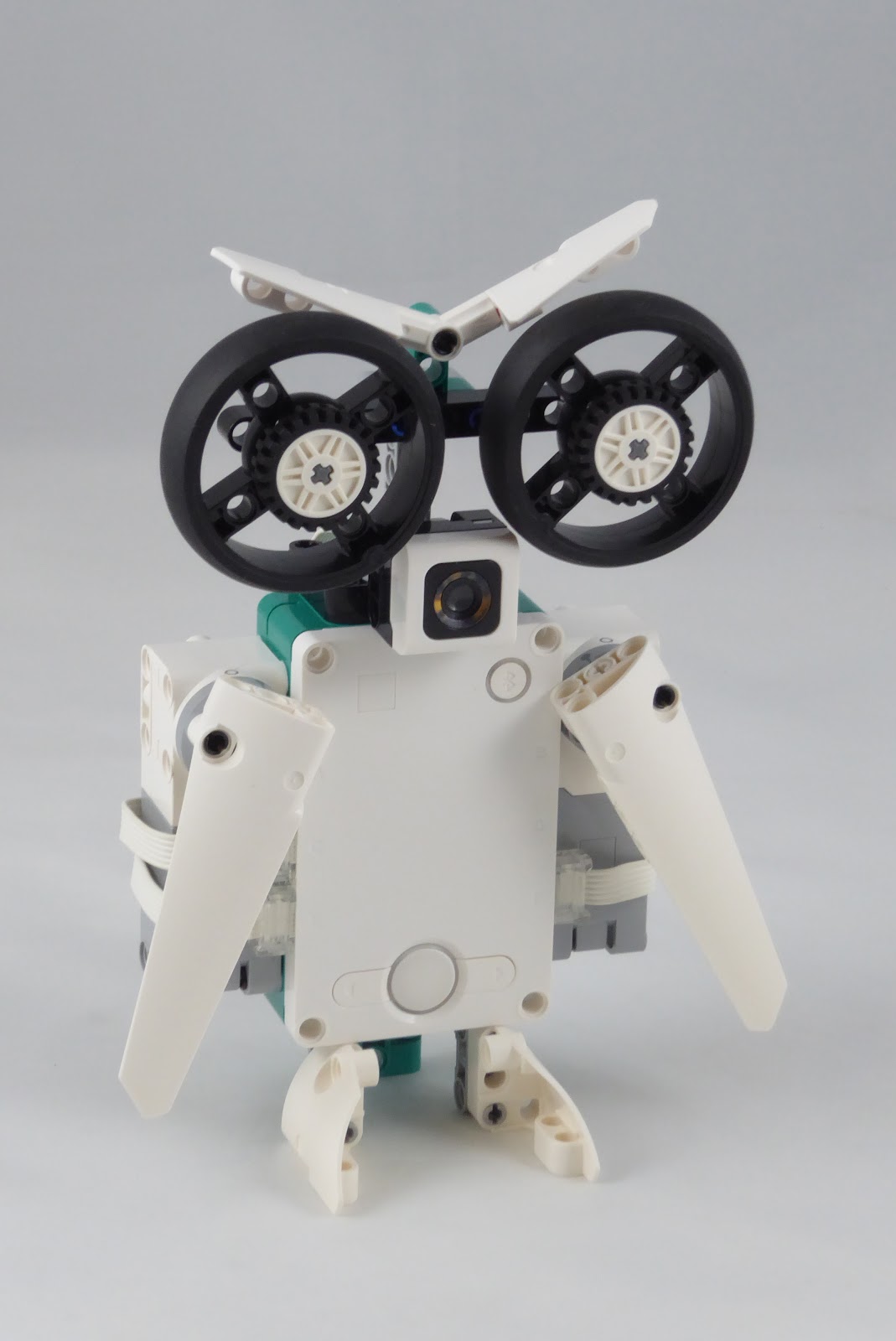 LEGO updates their software often.  How do you plan to tackle these updates given you have a printed book?

Updates are an issue! In fact, we ended up redoing most of the figures in the books at the last moment because LEGO issued a software update that included a new font. Though LEGO will make changes to the software after the books are published, we are confident that our books, which concentrate on the basics, will remain a valuable resource.

All images used with permission of authors. Book cover images from No Starch Press.